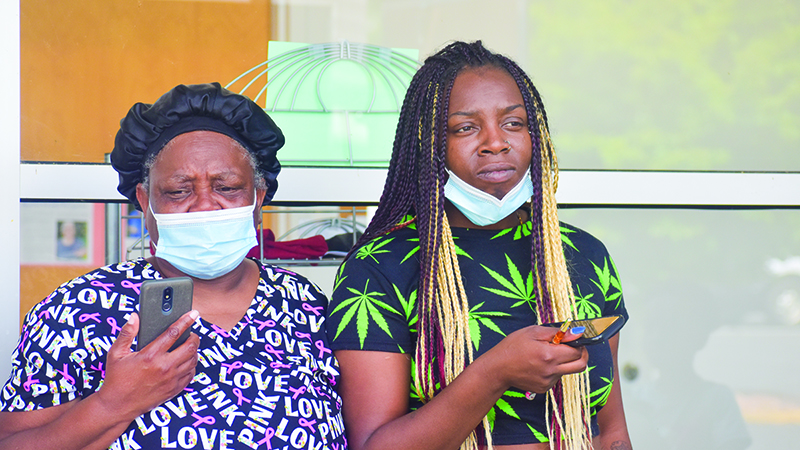 Mary Waxter-Johnson (left) and Keyon Williams (right) stand outside the Mike Daniel Recreational Center where a temporary shelter is in place. Both are on the phone with disaster relief agencies trying to find temporary shelters as their funds and options run low.

Keyon Williams, a mother of three from New Orleans, Louisiana, still has memories of when Hurricane Katrina pummeled her home when she was a child.

That’s why she, along with 14 others — consisting of her children and several other family members — fled Hurricane Ida to LaGrange and now are unsure how — or when — they’ll be able to go home.

“We’ve received messages from [New Orleans] saying that if we evacuated, it’s best we do not return because it’s not safe, it’s a hazard,” Williams said. “I don’t even know right now if I have a house to go home to.”

Williams and her group arrived in LaGrange on Friday and have been staying in two rooms at the La Quinta on Hoffman Drive, a stopgap measure that, as of Wednesday, will only last another day or so due to a lack of funds.

Upon evacuation, Williams and her children packed quickly and only brought enough clothes to last a few days, hoping they’d be home by Monday, Sept. 6.  Since arriving, she and her family have been seeking assistance from local and outside entities, including the American Red Cross, United Way and the Federal Emergency Management Agency [FEMA].

On Tuesday, the American Red Cross partnered with Troup County Parks & Recreation to provide a shelter for Hurricane Ida evacuees traveling through the area at the Mike Daniel Recreation Center. The shelter, which is providing basic necessities such as food and cots, will only be open until Friday at 4 p.m., said Holly Winner, executive director of the Centeral Midwest Georgia chapter of the American Red Cross of Georgia. Winner said Wednesday that the shelter is expecting as many as 215 evacuees to stop by the temporary shelter in LaGrange by the end of the day Friday, but expects that number may grow by then.

Williams lives in downtown New Orleans in the 9th Ward, she said, an area that experienced catastrophic flooding during Katrina. She came to LaGrange to stay with an aunt who lives in the area, but due to the size of their group and the concern of COVID, the aunt was unable to take them in, Williams  said. She has received gas cards from the American Red Cross to fund her trip back to Louisiana, and a family member in California has paid for an extra night at the LaQuinta, but after those funds run out, she and her family aren’t sure what to do or where to go and are concerned that a shelter wouldn’t be a safe place to stay due to COVID-19.

“I personally don’t feel comfortable in a shelter with people I don’t know because of [COVID],” Williams said. “We don’t have a game plan. We can’t go home … we don’t have nowhere else to go.”

“I won’t go to a shelter,” she said, noting COVID as the main factor and her and her husband’s own health problems. “You don’t know if anyone’s had the COVID shot or not.”

Waxter-Johnson stayed when Ida first impacted New Orleans earlier this week and only arrived in LaGrange at 3 a.m. Wednesday when she said she was forced to evacuate. Before leaving, she emptied her refrigerator because she was told that the lights would not be back on in her home until at least November. On Wednesday, Williams was on the phone for over an hour waiting for FEMA to answer her call. Her step-mother was waiting on the line with a different agency. Despite not knowing what to expect, Waxter-Johnson said that if she can’t find aid in LaGrange, she’ll return to New Orleans.

“I’m going to try to pray and let God lead the way,” she said.

Winner is currently directing evacuees to call 1-800-Red Cross or download the American Red Cross’s emergency app. The app has information on area shelters as well as shelters in Louisiana, Mississippi and Alabama.

“We are working with many of the families to get them closer to their homes,” Winner said. “We’ve deployed a lot of resources to the Mississippi/Louisiana area. Right now, we’re in the response stage and then we’re going to move into the recovery phase.”