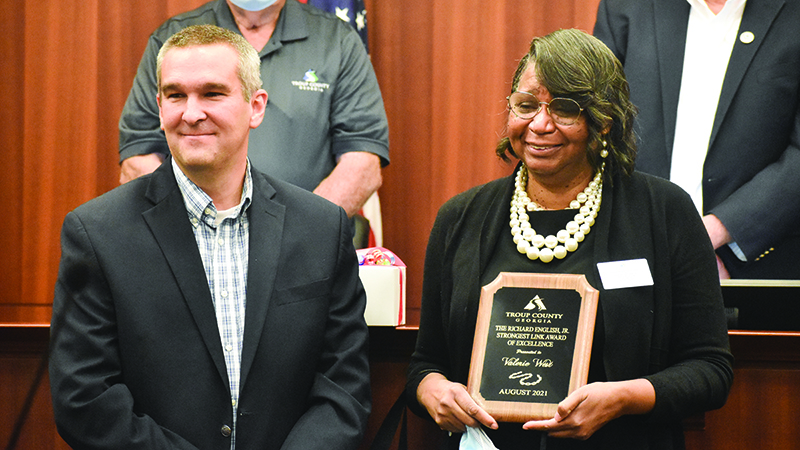 Troup County Manager Eric Mosley could barely hold back tears as he read off the criteria of the newly renamed Richard English, Jr. Strongest Link Award of Excellence award.

As he gave a brief description on the late Richard English, a former Troup County commissioner who passed away in August following nearly 40 years of service, his voice broke, but he remained composed and dutifully announced the first recipient of the newly renamed honor: Valerie West, county clerk of Troup County.

“With his passing, it was a huge loss for all of Troup County,” West said.

“For me, it was like I lost a family member. He was always a big supporter of mine. He always had kind words to say, and he taught me very well.”

She said that the other commissioners were a pleasure to work with and were supportive of the work ongoing in her office.

“People just don’t understand the level that you all go through to help people,” West said.

“I’m honored to work with all of you.”

West pointed out that English’s wife, Cheris Jones English, was in ill health and asked for prayers for her and her family. English served on the Board of Commissioners for District 5 for 43 years and was the longest-serving commissioner in the state of Georgia, according to Commission Chair Patrick Crews.

He was also the first and so far only Black commissioner in Troup County history.

The Richard English, Jr. Strongest Link Award of Excellence award will be given monthly to a deserving employee who has demonstrated excellent performance and productivity, loyalty, professional pride and other noteworthy accomplishments, per the description of the award.

The recognized employee receives a plaque, symbolic “link”, a name tag for which he/she will be the custodian until a subsequent employee is recognized and receives donations from surrounding businesses in the county.