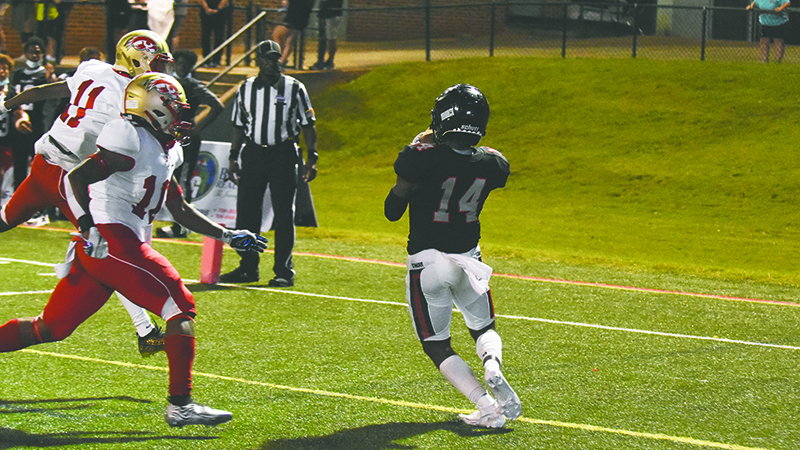 Carlos Bllingslea catches a touchdown in the fourth quarter to put the Cavaliers up 23-14. --Daniel Evans

Early in the fourth quarter of Friday night’s game, Hardaway had scored two second half touchdowns to take all the momentum at Callaway Stadium.

Carlos Billingslea changed that in a hurry with a huge kickoff return to put Callaway in the red zone. A couple of plays later, he caught a 25-yard touchdown pass from Deshun Coleman to give the Cavaliers a nine-point lead that they wouldn’t relinquish.

Callaway’s defense held twice as Hardaway knocked on the door in the closing minutes, and the Cavaliers (3-0) stayed unbeaten with a hard fought 23-14 victory.

“I’m really proud of our effort throughout the game. It was a tough ballgame, very physical, against a good team in Hardaway,” said Callaway head coach Pete Wiggins. “For our guys to stand tall right there at the end, I think it shows a lot of character, a lot of heart and toughness.”

The Cavaliers actually had chances to push the lead further. Coleman was intercepted at the 2-yard line on one drive, and after the Cavaliers’ defense forced a three-and-out, Callaway drove deep into Hardaway territory again. That led to a fourth and one, where the Cavaliers were stopped short.

Even with those missed opportunities, going into the break, it looked like the defending state champions might run away with the game.

Hardaway had other plans.

The Golden Hawks scored quickly on a 1-yard touchdown run by DJ Lucas with 6:32 left in the third quarter. Hardaway tried a fake extra point attempt, but Callaway stopped it to leave the score at 16-6.

Hardaway scored again when De’ante Childs found the end zone on a 14-yard touchdown run with 11:54 left in the game, and he also ran in the two-point try, pulling Hardaway within 16-14.

Billinglsea answered, returning the ensuing kickoff all the way to the Hardaway 19. An offensive pass interference call on Callaway in the end zone pushed the Cavaliers back to the 25, and threatened to stall another drive.

However, on the next play, Coleman threw a perfect pass to Billingslea, who tapped both feet down to ensure he was inbounds, and gave the Cavaliers the final lead they needed.

“Great throw and catch from Deshun to Carlos. I think the offensive line did a really good job giving him time,” Wiggins said. “We’ve got to make plays in tough situations, and we came through right there with the big play to win back momentum.”

With the game still very much in the balance, Cam Smith intercepted a tipped pass inside the Callaway 20. It appeared the game was over at that point, but the Cavaliers fumbled the ball back, setting Hardaway up in the red zone again with five minutes left to play.

The Cavalier defense — led by sacks by Elijah Gunn and Trey Stephens — came up with another huge stop to put the game away.

Gunn had four sacks in the game, including two on back to back plays in the second quarter.

“I think our defensive line did a great job as a group tonight,” Wiggins said.

Callaway will host Douglass next week.