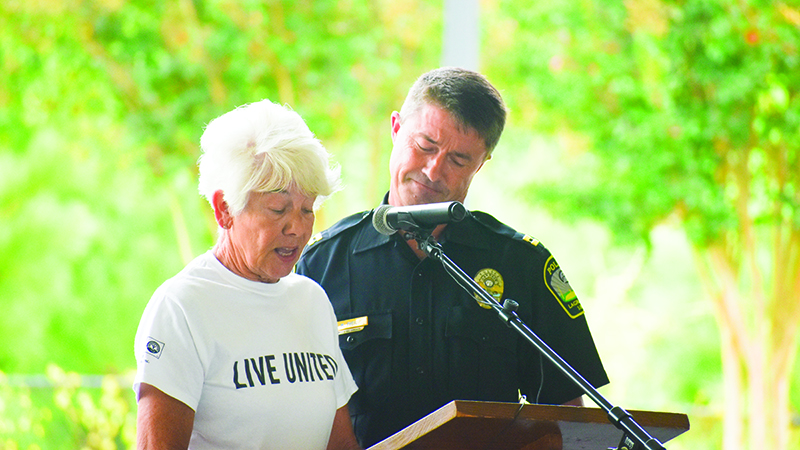 Kay Durand and Capt. Mike Pheil, who are both leading the United Way’s campaign efforts this year, read a statement about the United Way’s goal to help organizations in the area continue their efforts to serve the community.

United Way of West Georgia kicked off its campaign year Wednesday with a modest goal in mind to help several organizations in the area assist the community.

United Way is assisting 24 human service provider agencies in the community and plans to raise $1 million to further its efforts to assist those in need.

“We fund not only the efforts of the United Way but all of these organizations as well in some way,” said Patty Youngblood, president of the United Way of West Georgia. “That’s done through a volunteer process, and every organization has to make an application for funding every year. Then we recruit volunteers in January, and in February, we put the organizations on panels and we decide on funding on that.”

Recently, United Way partnered with the Callaway Foundation and the Community Foundation of the Chattahoochee Valley to start the Troup County Emergency Relief Fund, which brought in $161,000 dollars last year to benefit people who have been negatively impacted by COVID, Youngblood said.

“We granted that money out through a grant process, and to date, we’ve granted out $150,000,” Youngblood said. “We gave to organizations who had a process in place to help people.”

Adaptability is a secondary theme for the organization this year due to the ongoing pandemic’s effects on the community, noted Roy Nichols, chairman of the United Way, during the kickoff luncheon the organization hosted Wednesday. The luncheon was held outside at Sweetland Amphitheater due to the current COVID conditions. The luncheon featured a speech by Milton J. Little, Jr., the first African American President of United Way Greater Atlanta.

The actual theme this year is ‘Stronger United’, said Kay Durand, who serves on many local boards in the community and Capt. Mike Pheil with the LaGrange Police Department, who are heading the campaign this year.

“I want to do my part to support the work of agencies that meet the needs of those who are hurting,” she said. “I wanted to help lead this year’s campaign because now more than ever, our neighbors need our support.”

To aid in the campaign, United Way is spearheading a new project called a Day of Caring, which will consist on working with Calumet Park on several smaller projects.

“As many of you know, the city has put together a master plan for improving all the city’s parks,” Durand said.

“We will be helping with some of these projects and will have other inside projects for those who don’t want to work outside.”

This project will begin on Sept. 30. Durand and Pheil plan to have more information about the project closer to the date, they said.