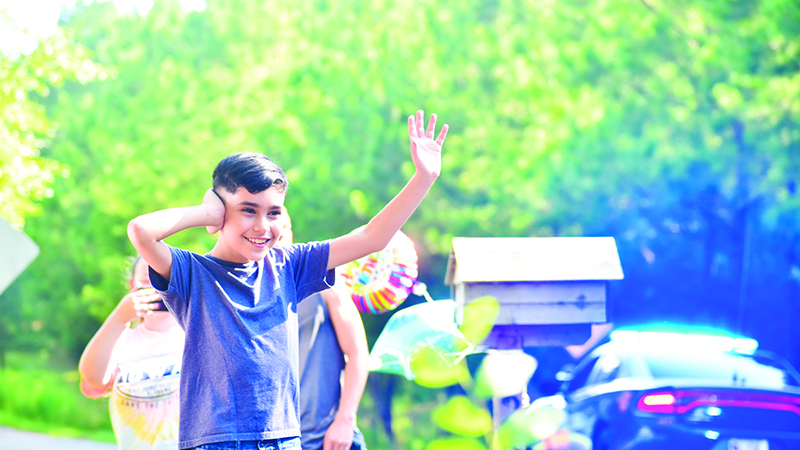 Gabriel “Gabe” Luke looked anxiously down Tomme Road on Wednesday, knowing some sort of surprise was coming. His mother, Brandi Luke, had told him in advance that due to her illness and upcoming surgery, they couldn’t have too many people over. However, there were “a lot” of people who wanted to wish him a happy 10th birthday.

A moment later, two Georgia State Patrol cars turned on their sirens, and a procession of other vehicles, including a LaGrange Police Department car and a LaGrange Fire Department firetruck, glided by, honking, waving and yelling out birthday wishes to the boy.

Gabriel was thrilled, and his mother was touched.

“We had nine or ten people we thought were going to do it…and it’s exploded from here,” Brandi said. “I’m so blown away with how this all came together, and I’m so grateful for the community.”

The birthday surprise was all thanks to the quick thinking and generosity of a handful of Chatty LaGrange Women and Chatty Cares Women of LaGrange, two prominent women-only Facebook groups that Brandi is a member of.

The plan came to fruition after two members of both groups, Deborah Galloway and Lorna Strickland, responded to a message Brandi sent to Chatty LaGrange Women inquiring about help with picking pears in Greenville.

Upon meeting Brandi, Deborah learned that she was very sick and raising her son.

Brandi adopted Gabriel in 2012 following the death of her cousin and only a few years after the death of her oldest daughter. Within a few years, Gabriel was diagnosed with high functioning Asperger’s and ADHD. Brandi said she learned to conquer the ups and downs of raising a special needs child, but her own health issues soon caused challenges.

Brandi has been dealing with gastroparesis, a disease in which the stomach cannot empty itself of food in a normal fashion and causes a person great discomfort.

She is going into surgery on Sept. 8 to try to mend the problem more effectively.

Due to her incoming surgery, Brandi had to stay isolated and couldn’t go to celebrate Gabriel’s birthday the way she wanted. She inquired to Deborah and Kimberly Smith, her point of contact with the Chatty Cares Group, if they would do a simple drive-by parade for her son.

Galloway took Gabriel’s wish list, and several Chatty members bought presents for Gabriel. The Gray Hill Church of God offered its parking lot as the starting place of the parade, which is right up the road from the Lukes’s home.

“[My favorite part] was seeing Gabriel’s face,” Brandi said. “He asked me,‘Am I still going to have a birthday party this year,’ and I said a few people were going to drive by. He had such a humble heart about it.”

Gabriel said his favorite part was the parade itself, and he was shocked at the number of people who showed up.

Following the parade, he was showered with gifts from friends, family and Chatty group members and had one of his favorite meals, lasagna, for dinner.

“I was told I was going to get a parade for my birthday, but I wasn’t expecting this,” he said.