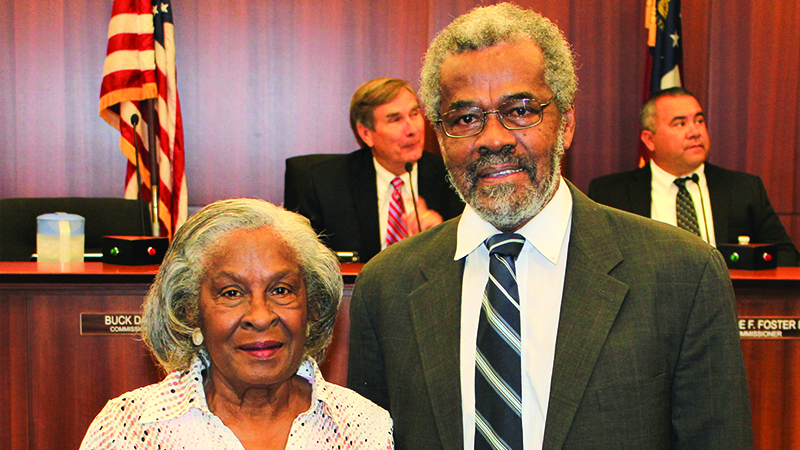 Cheris English stands with her husband, Commissioner Richard English Jr., during a service award ceremony in 2015. Cheris passed away Friday, one month after her husband.

The Troup County Board of Commissioners announced on Friday that Cheris English, a  school teacher and the wife of the late Richard English, Jr., passed away.

Cheris’s death comes one month after her husband’s, who was the longest-serving commissioner in the State of Georgia, and who served Troup County’s District 5 for 43 consecutive years. Richard and Cheris were married for more than 60 years, per a press release from the county.

“Our thoughts and prayers are with the English family as they navigate this difficult time,” said Eric Mosley, Troup County manager.

“Richard and Cheris have both left lasting impressions on Troup County history, and we cannot thank them enough for the strength, dedication, and love they have shown our community throughout many decades of service.”

“Mrs. English, in her own right, was very well known and well respected in the community,” he said. “I’ve run across former students of hers in the county, so she was respected in education and involved in various other community activities over the years. [She] will be a great loss for us in the community.”

Cheris taught LaGrange Mayor Jim Thornton civics when he was a ninth-grader at LaGrange High School, he said.

“She was a great teacher who took an interest in her students both while in school and later during their careers,” he said.  “She had several memorable witticisms that I still carry with me. I always enjoyed visiting with her and Mr. English, and in recent years was able to serve as their personal attorney on several items. She had a wonderful life that touched many, and she will be missed.”

Funeral services have not yet been announced.