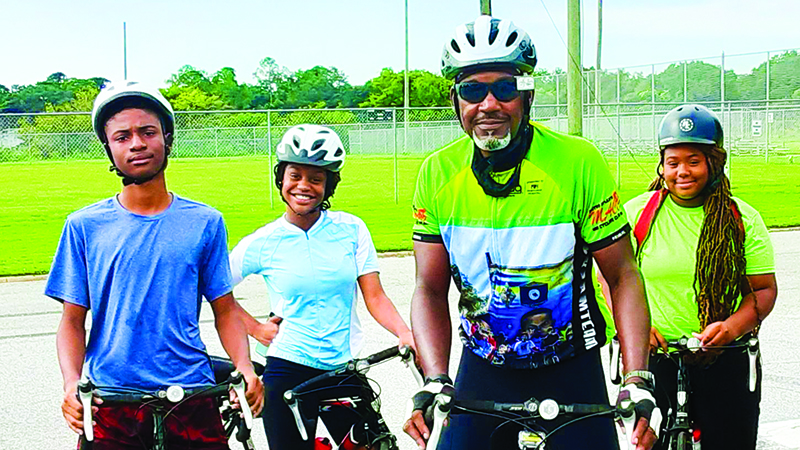 LaGrange local Eddie Rhodes has found a way to intertwine his love for biking with his passion for helping the youth within his community.

Recently, Rhodes was able to create a local chapter of Bike Racing Across Georgia Dream Team, a mentorship program that assists children and teens in gaining better life experiences through cycling.

“This is a great mentorship to work with youth providing extraordinary cycling experiences year-round, and it [exposes] them to educational and cultural sites in the greater community,” Rhodes said. “I have been very impressed with the youth leaders from other chapters around the state and thought LaGrange should have a chapter here in our community.”

In the evenings at least four days a week, the group meets at Rosemont Elementary School and takes to the back roads of Troup County for a 20 to 25-mile ride, Rhodes said.

Currently, the chapter has three participants between the ages of 13 to 17 years old, Rakyla Favors, Eijah Covers and Tre Franklin.

Tre Franklin’s mother, Nikki Franklin, who used to cycle herself, encouraged her son to get involved after seeing a post about the program. She said while he was hesitant at first, Tre has since become fully involved in the program.

“It really moved in a different direction for him,” she said. “I think his longest ride [with Rhodes] has been about 70 miles.”

Now, Tre is saving up to buy a professional bike.  Upon completing the program, participants will be awarded one of their own, Rhodes said.

Participants in the program not only get to go on biking trips in the area and further but also get to be exposed to educational opportunities and leaders within the communities they visit.

Earlier this summer, LaGrange’s Dream Team traveled to Brunswick for the Brunswick Community Bike Ride and got to meet family members of the late Ahmaud Arbery. Participants also had the chance to meet professional cycling group Team Medellin just before the LaGrange Cycle Classic event held last month and learned about their experience as professional bikers. The participants also volunteered at the LaGrange Cycle Classic as helpers, giving them up-close experience with professional bikers from all over the country.

“Last weekend, the team was involved in contributing to the success of the Metro Area Atlanta Cycling Club ‘One Love Century’ ride,” Rhodes said.

The Dream Team organization first started in Atlanta in 1994 and has expanded to other cities and towns in Georgia over the last decade. The program is an affiliate of BRAG, which Rhodes participated in earlier this year and has been a part of since 2008.

One of the benefits to the kids and their families is that it costs them nothing except a love of cycling and sweat equity, Rhodes said.

Rhodes is partnered with the Communities in Schools, who help him locate children that may be a great fit for this type of program, he said.

Currently, however, Rhodes is keeping the chapter small for now due to a need for more adults to help mentor the participants and a lack of donated bikes.  Those who are interested in donating time or bikes can contact Rhodes at (706) 957-0246 or erhodesmes@gmail.com