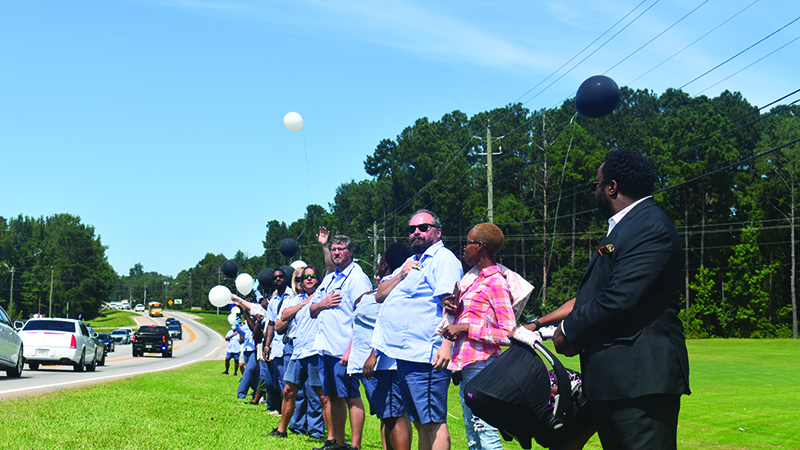 A different kind of men in blue lined the south side of the LaGrange Mall Wednesday, all taking a moment from their busy schedules to honor a fellow United States postal worker.

Over 50 LaGrange postal service members, including city and rural carriers, clerks and supervisors, waited outside the mall for the funeral procession of Hogansville resident Jenny Marterella, 56, who served the postal service for nearly 30 years.

Marterella passed away last Saturday after sustaining injuries from an ATV accident outside of her residence. Within days of her death, co-workers were already feeling her loss.

Marterella’s viewing and funeral took place on the same day Wednesday, said her co-worker Michelle Bradfield, leaving a bulk of her co-workers unable to say goodbye due to work conflicts. Earlier this week, many of them visited Marterella’s husband and other family members after work but wanted to do something more personal to show their appreciation for her years of kindness.

“She was always so positive and wanted to say a prayer with you,” Bradfield said. “If any of us had kids, she’d tell to bring them to her church for vacation bible school or Camp Viola. She was always that person who you could go to and you’d know everything was going to be OK.”

Sandy Strozier, the postmaster for the LaGrange Post Office, said that with her passing, one of the brightest lights in LaGrange had gone out.

“She always had something positive to say, and she was always positive,” Strozier said. “There’s so much I can say about her, not just as a co-worker but as a person.”

As the funeral procession eased down Davis Road, co-workers formed a line and each released a black or white balloon as Marterella’s hearse went through. Friends and family of hers thanked the co-workers from their cars as they stood in silence, awaiting the last car to continue to Restlawn Cemetery.  Behind them in the parking lot were dozens of mail trucks and personal mail-carrying cars that flashed their lights in Marterella’s honor.  Strozier said that during a meeting earlier this week, some of the first people to speak kindly on her behalf were new employees.

“She went in and gave them encouragement about the job,” he said. “That’s just how she was.”

Following the procession, workers returned to their postal duties, comforting one another.

“It’s devastating to us,” Stozier said.

“We know [her family] misses her, but we love and miss her as well,” Strozier said. “She was a part of our family. We loved her.”