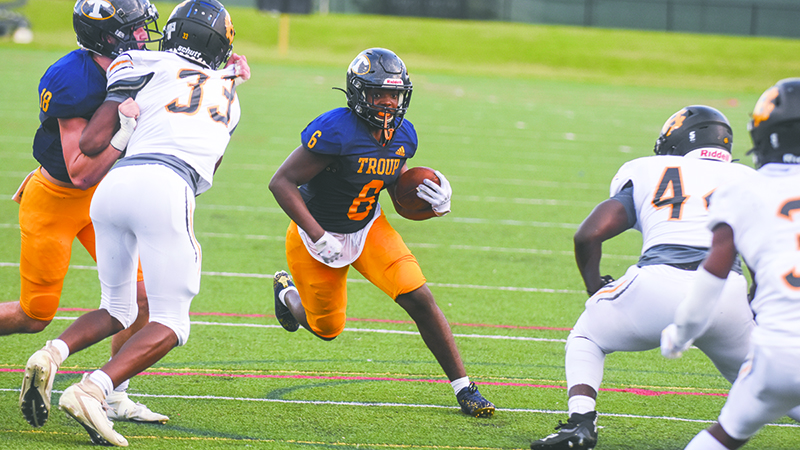 Troup trailed by 25 early on, but somehow, someway rallied for a dramatic 41-34 overtime victory over Hardaway Friday night for one of the biggest comebacks in school history.

T.J. Mitchell scored on a 2-yard rushing touchdown in OT and the Tigers (2-1) defense held the Golden Hawks out of the end zone to preserve the incredible victory.

It was a reversal of fortunes from the first half, when nothing went right for the Tigers.

Early mistakes — a fumble and interception — set Hardaway up with a 14-0 lead just minutes into the game. The early rout continued as Hardaway jumped out to a 28-3 lead.

The Tigers started rallying in the second quarter, managing to pull within 34-18 at the half.

Early in the third quarter, Troup drove into Hardaway territory and was stopped on downs at the Hardaway 1-yard line.

However, on the very next play, a bad snap turned into a safety, bringing the Tigers within 34-20.

Hardaway had to kick the ball to the Tigers, and Troup took advantage. Tyson Duncan connected with Noah Dixon for about a 40-yard touchdown to make it a seven point game with 8:41 left in the third quarter.

On the next drive, the Golden Hawks drove inside the Troup 1, but the Tigers defense held tough and kept Hardaway out of the end zone. Troup managed to drive the distance of the field, with some help from Hardaway.

The Golden Hawks had seemingly stopped the Troup drive deep in Tigers’ territory, but a roughing the punter call kept the drive alive.

The teams traded possessions at that point, with Troup having a punt blocked to set Hardaway up with a chance to win the game in the final minutes. However, the Golden Hawks gave it right back, as a holding penalty moved them out of field goal range. A high snap then turned the ball over to the Tigers and flipped field position, taking Hardaway from around the Troup 35 to giving Troup the ball on the Hardaway side of the field.

The Tigers were unable to take advantage, sending the game to OT.

Troup got the ball first and Dwartney Wortham caught a pass to put the Tigers at the 2-yard line. Mitchell, and the defense, did the rest for one of the largest comebacks in Troup history.

The Tigers will play at Spencer next week.