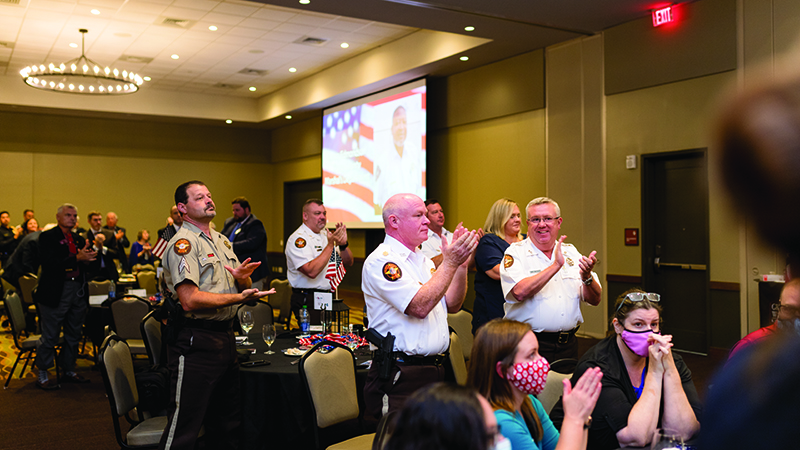 As the Chamber commended the individuals for their bravery and dedication to their community, the 20th anniversary of the Sept. 11 Twin Towers attack weighed heavily on the minds of those in attendance.

“Probably everybody here can remember where you were when you heard the news,” said Chris Carr, the Attorney General of Georgia who acted as the keynote speaker for the event. “One of the things that will stick with me are the images of that day. Not just of buildings burning and the Pentagon [being on] fire, but the images of firefighters entering the building, police officers standing on the street…those images are forever seared into my mind.”

Carr reminded attendees of the recent passing of James Wade, an EMT who was killed on I-85 earlier this week while assisting an injured car crash victim, and that like him, the lives of service members are not guaranteed.

“You put your life on the line for us, and some of us will never know exactly the countless acts and unsung acts of heroism and daily sacrifices you make on our behalf,” he said.

West Point Fire Department’s Chief Milton Smith was the recipient of the Shining Star Award, which is awarded to one who has made exceptional contributions in both professional and personal endeavors over an extended period of time for those to follow.

With a career spanning 34 years, Smith started off as a volunteer before transitioning to a firefighter, a lieutenant, a captain, an assistant fire chief and finally a chief. In his spare time, he serves in several organizations and as a decon at his church. He has also spearheaded an EMS training program in addition to putting into place a paramedic training agreement with LaGrange College.

The LaGrange Police Department’s Marcus Horne was awarded the Medal of Merit Award for his commitment to education and outreach in the community. Horne works as a resource officer for Garden Newnan Middle School.

The Troup County Fire Department’s Capt. Rusty Brown, firefighter/EMT Eric Rogers and volunteer firefighter Jason Cadenhead were the recipients of the Lifesaving Award, which is given to a public safety official or unit for their valor during a life-threatening event.

The three responded to a house fire where an individual was still inside. One of the emergency workers went through a window to get to them as the other responders accessed the fire outside and inside the residence. As the house fell around the firefighters, the firefighter inside quickly got the individual out, saving her life.

LaGrange Police Department’s Detective Jason Duncan was the recipient of the Public Safety Person of the Year Award, which is awarded to someone who has performed their job with exceptional skills, expertise and results. In one case, Duncan was investigating an entering auto case and received visual evidence from video cameras and a description of the suspect. Duncan eventually made contact with a suspect who matched the description they were looking for, and he was able to match him with 36 other incidents. Using technology and his own expert attention to detail, Duncan was able to solve various other crimes, including a murder.

The LaGrange Police Department’s Lt. Mark Cavender and Sgt. William Nelson were awarded the  Public Safety Unit of the Year for their investigation in the case of a man who was serving time in prison for a crime he did not commit.

The team worked tirelessly to reinvestigate the 40-year case and located new evidence to assist them with proclaiming the individual’s innocence.

Troup County 911’s Shannan McLaughlin was awarded the Communication Person of the Year award for her assistance in helping a woman who had giving birth in an isolated location. McLaughlin was able to help the woman with her medical needs all the while assisting the EMTs in pinpointing the woman’s location.

Using careful procession and various resources, the unit managed to free the passenger from the car, which had fallen several feet off a bridge, and flown safely to the hospital.

The Troup County Sheriff’s Office’s Investigator Jamie White was awarded the silver medal of valor for his work in disarming a suspect who would not put down his gun. Officers fired shots at the suspect to protect themselves and the suspect fell into a lake. White subsequently went into the water to attempt lifesaving measures.

The Georgia State patrol’s Trooper First Class Brian Harman was awarded the highest medal of valor due to his courage during a dangerous pursuit. Harman pursued a suspect who had a gun and a woman locked in the car with him. The suspect crashed his car into a ramp but continued to attempt to flee, forcing Harman to use his own car to push the suspect’s car out of the roadway and thus protect other drivers. While the woman of the car managed to escape, the suspect stayed in the car and held a gun to his head. Harman stepped forward to reason with the suspect and subsequently used his taser to stop him from causing harm bodily harm to himself or anyone else.

The Chamber additionally presented a new award: the Commissioner Richard English Jr. Lifetime Achievement Award. English, who served as a commissioner of Troup County for 43 years, passed away in Aug. English’s wife, a service member of the community and longtime school teacher, passed earlier this month.

The award was planned three months prior as a token of appreciation for English.

The recipient of the new award was Troup County Marshal’s Department’s Cheif Lonza Edmonson, who has served the county in various capacities for over 30 years.

English’s sister, Rosalind, and her husband, Kenneth, helped present the award along with Commissioner Chairman Patrick Crews and were then presented with commemorative plague as well.

Gov. Brian Kemp and his wife, Marty Kemp, who were unable to make it to the ceremony, sent a message congratulating the recipients.