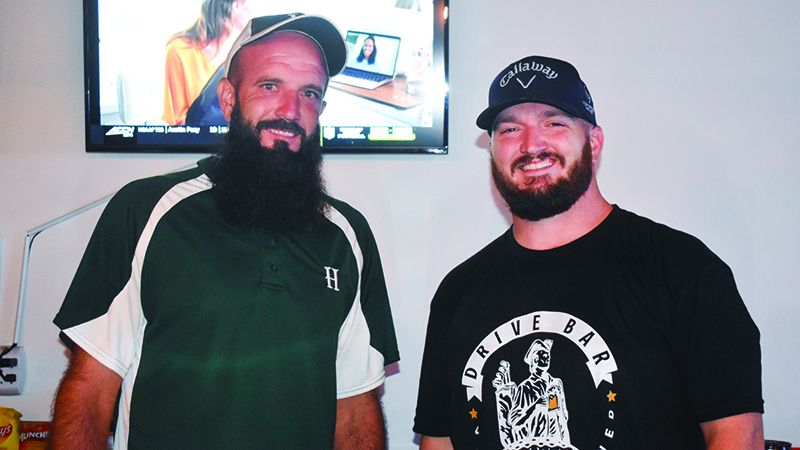 James Bailey had been steered to the gymnasium at Hogansville Elementary the day the Twin Towers in New York were struck. He and his classmates had been instructed to line the walls “tornado drill style” while their teachers tried to figure out just what was going on in New York City, unsure at the time if the attacks were heading their way.

Years later, the events of that day and the days that followed Baily as he joined the Navy and on Saturday, the 20th anniversary of the attacks, Bailey and his cousin and business partner, Brett Chapman, honored those who served and are still serving during the grand opening of their Hogansville business, The Drive Bar.

Bailey said a high number of servicemen, in civilian clothes and decked out in uniforms, came to their business for their special “first drink on us” military special, their families in tow.

Near The Drive Bar’s porch deck laid a 9/11 memorial of magazines and even newspapers from 2001 for passerbys to look at.

Cody Tempt, who said he is planning to enroll in the ​​Atlanta Police Training Academy, was flipping through a LIFE magazine from that year while he was waiting for a friend to get to the bar.

“We actually heard [about the attacks] on the radio,” he said, noting he was about seven-years-old. “My dad yelled at us all to hush when he turned up the radio. I don’t remember exactly what it said but I remember the word ‘catastrophic’”.

Growing up with the reminder of the attacks every year used to make him bitter, he said, but being older now and wanting to step into public service has made him rethink the tragedy just a bit.

“I really don’t ever to have to respond to something like that, but I will,” he said.

At the end of the day, Bailey and Chapman, both now retired servicemen, called the day a success, both for their business and for the memory of the servicemen.

“It’s been really awesome to see the turnout and the response and to see all the families come out,” Bailey, a father of two, said.

“I’m glad we got to do this…honor them this way.”