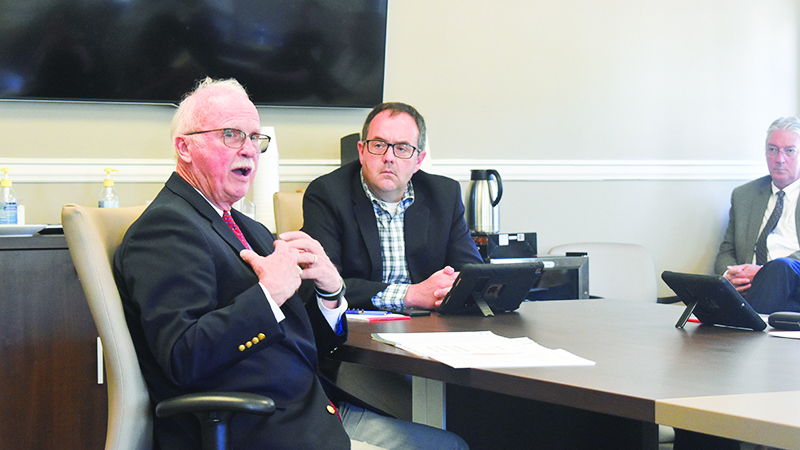 Judge Key explains the purpose of the Early Response Program during a work session in July.

During its Tuesday work session, the LaGrange City Council mulled over the costs of the proposed Early Response Program, an initiative that has the potential to help families in domestic situations and assist police officers with handling those types of calls.

The council discussed the probability of funding $45,000 to the Troup County Juvenile Court, which would cover the program’s expenses for its first year, a payment that could continue or fluctuate in the future should the program be successful, said City Manager Meg Kelsey.

The decision to fund the program will be voted on in an upcoming council meeting.

In July, Judge Michael Key with the Troup County Juvenile Court laid out the project’s purpose and its need in the community as well as its advantages for the LaGrange Police Department.

The hope is that the program would alleviate some of the man hours in-crisis family calls require of the LPD.  The program, which uses the acronym ERP, would essentially be an agreement between the juvenile court, LPD and trained professionals through an outside agency that would assist the LPD with calls t the scene of family-related calls within the city limits of LaGrange.

“We ask our officers to do a lot of things, including social work, [but] that’s not really what they’re per se trained for,” Thornton said as he summed up the project’s proposal. “As we know, we have time when we’re short officers, and they have more calls than they can respond to. That’s sort of the trade-off there.”

Thornton asked if the program could be funded through the American Rescue Plan Act. Kelsey said she would explore the possibility.

ERPs would provide a social and behavioral health response to identified families in crisis to support and relay a law enforcement response, Key said.

Coordinators would monitor and provide short-term preventive services to the family, including finding them affordable therapy.

The role of the coordinators, when called on scene by law enforcement, would be to assess and stabilize the situation at the scene; navigate behavioral health, mental health or any other needs the family has and monitor participation in any suggested services.

Expected costs would include $1,500 per month for basic costs of having the coordinators on-call during off-hours, up to 99 hours per week, and $2,250 per month for them to actively work cases, according to the project narrative.

Key predicts that after the first year of the program, the need for services should be more predictable.

LPD Chief Lou Dekmar previously voiced his support for the program, stating that it would help alleviate officers spending a lot of time in domestic matters that could be handled more suitably by trained professionals.