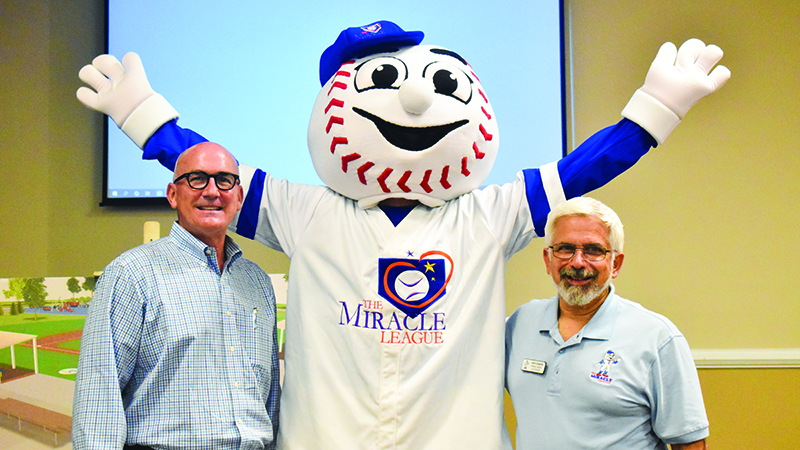 John Dowd with Playground Creations, Homer, the Miracle League mascot, and John Cipolla with the Lafayette Christian School hope that the community will support the Miracle League of LaGrange project with imput, sponsorships and prayers.

The Miracle League of LaGrange is pushing forward with its efforts to create an inclusive baseball field and playground in LaGrange, but it is also looking toward possible sponsorships to help bring in playground equipment to enhance the experience.

John Dowd, a specialist with Atlanta-based Playground Creations, presented designs and examples of playable equipment that could be added to the playground if enough funds are gathered during a community-wide meeting at Lafayette Christian School Tuesday night.

The playground will be built at LCS.

The playground will be uniquely designed for play for those with physical and mental disabilities such as sensory processing disorders, autism, Down syndrome, and even for children without disabilities who can participate with their siblings, friends or parents.

“There’s not a piece of equipment that we just put out there,” Dowd said. “There’s a reason for everything that we create, especially when you’re building things like this.”

Popular pieces of playground equipment include the inclusive We-Go-Round, which allows both able-bodied individuals and those who are wheelchair-bound to spin and push on the device.

Other pieces include a stationary cycler that allows users to engage in repetitive pedaling, sensory play centers and several musical devices such as drums.

Details such as color scheme are not concrete just yet, Dowd said, but tree shading over many of the equipment pieces will allow them to keep from fading too quickly. He said that in most cases the equipment won’t have to be replaced for several years if it’s well-maintained.

“We can adjust things as we design the playground differently, change things out, however we want to do it,” said John Cipolla, Superintendent of Lafayette Christian School.

Fundraising efforts to get the project going at LCS have been successful, Cipolla said.

Several other pieces of playground equipment can be sponsored and even named for a variety of prices. So far, Pepsi-Buffalo Rock has dedicated $150,000 to name the playground.

The construction driveway and tree planting are supposed to take place this week and next week, Cipolla said. An official groundbreaking ceremony will be announced at a later date.

Those who are interested in sponsorship opportunities for the Miracle League of LaGrange playground can contact miracleleagueoflagrange.com or (706) 881-9423.