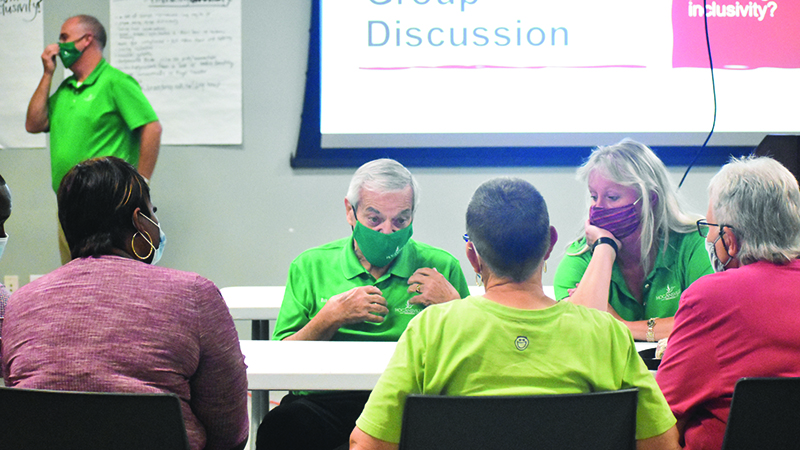 The subjects of diversity, equity and inclusion may not always be the easiest subjects to approach, let alone discuss openly.

However, the Hogansville Library was packed Wednesday night with individuals, a mix of local leaders and residents, who had that conversation freely and learned about obstacles that exist in the community and how they could be addressed.

“We started this as a basic intro to get members of the community together to talk about what [diversity, equity and inclusion] are and that you are also valuing the differences in your community.”

Participants discussed their own dealings with diversity, equity and inclusion.

“We’ve done a much better job in recent years, but there are things we still need today,” said Theresa Strickland, a former Hogansville Councilwoman and Mayor Pro-Tempore.

“I think we’re a lot more diverse than some people think,” he said. “I think when you’re coming down the interstate and you see a town called Hogansville, people automatically assume something. It’s good when you see people trying to embrace diversity, but I think there’s a lot more that needs to happen, especially for the next generation.”

Holding a forum like the diversity one was a good start, he added.

Mayor Bill Stankiewicz’s group discussed how differently people see diversity and inclusion due to their own backgrounds and upbringings.

Stankiewicz used the integration of the local schools as an example.

“When I first came to town, one of the first things I heard was that there were no problems desegregating the schools, there was not a problem, and then I talked to a young woman who was one of the first children [who] was involved in that desegregation, and she told an entirely different story, that it was ugly and it wasn’t good,” he said. “There were two people looking at the same problem and seeing it entirely differently.”

Additional diversity forums may be a possibility in the future, Broome said.

“I say community a lot because your building a community [through these conversations,” he said. “You have to keep the discussions going.”