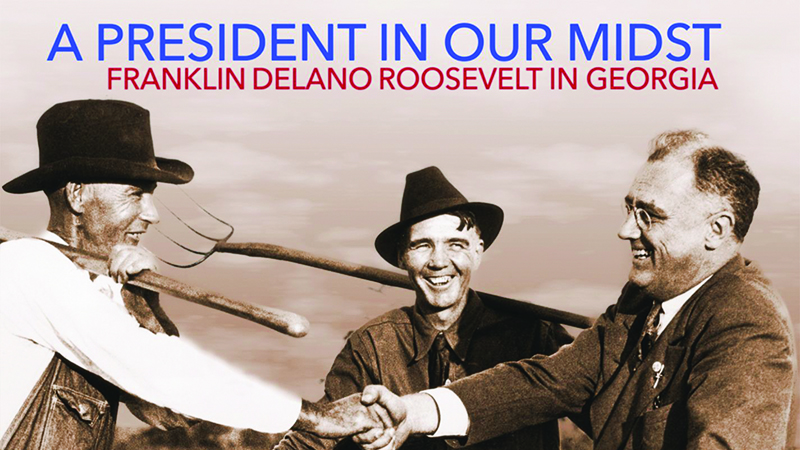 A President in our Midst: Franklin Delano Roosevelt in Georgia, will air on Georgia Public Broadcasting on Tuesday, Sept.21 at 7 p.m.

This compelling new documentary describes the mutual benefits that the friendship provided to both the President and the people of Georgia, per a press release from LaGrange author and screenwriter Kaye Minchew.

The film has several strong LaGrange connections in addition to the fact that Franklin D. Roosevelt often visited Troup County during his stays at Warm Springs between 1924 and 1945.

In January 2019, Minchew and executive producer Dan White of Yatesville and Atlanta approached Georgia Public Broadcasting with a proposal to create a documentary about FDR’s life in Georgia based on Minchew’s book, A President in our Midst. In January of 2020, Georgia Humanities agreed to be the official sponsor of the documentary and Georgia State University TV agreed to provide the technical expertise necessary to create the film. Filming began in Sept. 2020, in locations throughout Georgia.  LaGrange, Gainesville, Athens, Atlanta, Warm Springs, Thomaston, Barnesville as well as Harris, Meriwether and Upson County are all featured in the film.

Using drone photography and location shooting, combined with archival photos and historical film clips, A President in Our Midst brings to viewers a contemporary image of life during the period 1921 to 1945.

Over 70 Georgians helped create the finished product. LaGrange actor Carol Howington Cain is one of the featured performers in the documentary along with James Fowler and Bill Murray.

Oral history narratives from a variety of Georgians whose lives and institutions were profoundly shaped by FDR and the New Deal in Georgia are also featured. This most consequential of stories will be presented to a new generation of Georgians.

Other Troup County connections include Lee Johnson, music professor at Auburn University and formerly at LaGrange College, and Kelton Hunt, a teacher at Troup High who provided a voiceover.

Historic photos from the Troup County Archives, Little White House, Roosevelt Warm Springs Archives, the FDR Library, and archives across Georgia are featured in the documentary.