The Mind Clothing owner to be featured in GPB education special 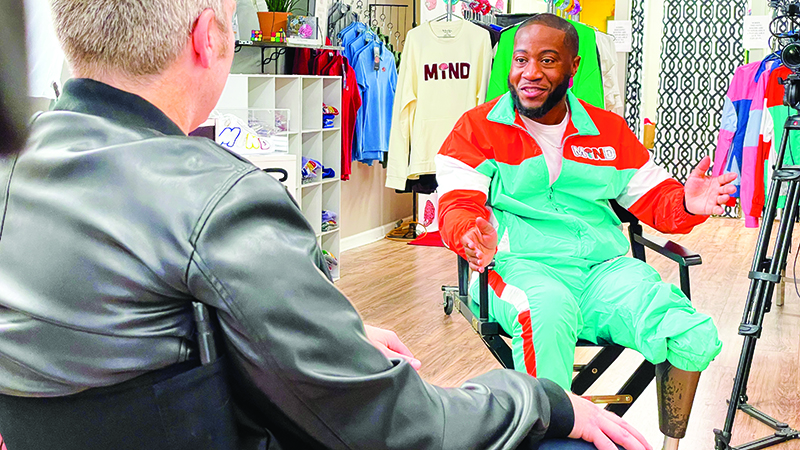 Above, Brandon Todd sits down with filmmaker Tamlin Hall to share his experience as an entrepreneur, which he will share in an episode of an upcoming education series for Georgia Public Broadcasting. Right, Todd proudly displays one of the scars he earned from an accident two years ago that helped push him to be a motivational source in the community.

Brandon Todd has learned much in his 28 years about resilience and positivity through loss. Many locals know his story, and by the end of September, others in the state will have the chance to hear it as well.

Todd, owner of The Mind Clothing store in downtown LaGrange, is set to be featured in a free, documentary-style series called “Hope Givers” through Georgia Public Broadcasting. The series will feature stories from individuals across the state who characterize hope, resilience and maintaining positive mental wellness.

Todd will be featured in the next-to-last episode of Hope Givers’ first season titled “Resiliency: One Step At A Time.” The episode highlights Todd’s process of creating his own clothing line and how he opened The Mind Clothing in downtown LaGrange.

The episode also highlights one of his biggest hurdles to date.

Two years ago, Todd was driving his motorcycle in Atlanta when he saw another cyclist pulled over on the side of the road. Always one to help out someone in need, Todd pulled over onto the shoulder of the busy roadway to assist them.

In a flash, that moment of kindness nearly cost Todd his life.

“I was struck from behind,” Todd recalled. “The car hit me off the motorcycle, and instead of hitting me and I [flew] off, it hit me and went over and started dragging me. If I had to take a wild guess…I’d say it [drug me] for ten or 15 seconds.”

Todd would undergo over six weeks of recovery in the hospital as doctors addressed his severe road burns on his left arm, shoulders and chest, all of which were patched with skin graphs from his own thigh and a mix of synthetic pigskin, he said.

He also lost his left leg, which doctors were unable to save.

“For the first week, they tried [and] spoke with the plastic surgeon and other doctors from other hospitals,” Todd said. “Finally, the doctor came into the room and said “above the knee or below the knee?” I’d already put it in the back of my mind that, if they couldn’t save it, I’d rather lose my leg than my life.”

Physical therapy on top of treatment for an infection he got from the surgery, which Todd still goes through today, followed suit to help him adjust to his new prosthetic leg. The mental toll, he notes, was lighter.

“I told myself I’m going to do the best I can with my situation,” Todd said. “If I had to alter anything that I do, that was fine. I climbed a mountain before, and I just didn’t climb it the same way that I had with two legs. I rode a bike before, and now I do it differently.”

Todd would take this spirit with him in 2020 when he completed a life-long dream of his to open The Mind Clothing. Now, he uses his story as well as his business savvy to inspire others.

Intertwined with Todd’s and other featured stories throughout the program will be lessons on maintaining positive mental wellness through animated segments, youth self-care activities, student films, musical guests and “Youth Across America” segments that showcase young people who are addressing mental health and physical hurdles in their own lives, all appropriate for the target sixth to twelfth grade age group.

Featured in Todd’s episode is Statesboro High junior and Blue Devil golfer Tazmerria Wilson. Wilson, a paraplegic, was diagnosed with a rare bone condition at the age of three and had to have both of her legs amputated.

Like Todd’s her story involves overcoming obstacles and inspiring others.

The show, which also examines realities like human trafficking or drug addiction, is hosted by Tamlin Hall, a LaGrange native and filmmaker who noted that on top of the show’s educational value, it will strive to put the spotlight on individuals from more rural towns across the country.

The series is a first of its kind, Hall noted, and was released Tuesday on GPB: www.gpb.org/hopegivers

It will be released in October nationally on PBS LearningMedia, Hall said.

“What we wanted to do is offer a pay it forward initiative where people can offer stories and become advocates on how they deal with struggles that they deal with in healthy ways,” Hall said.

“There are healthy ways we can deal with stress and deal with anxiety and oftentimes students or their parents don’t have the resources. We want to create this one-stop-shop where people can walk away with the idea that [this was] not just an educational series, it was fun.”