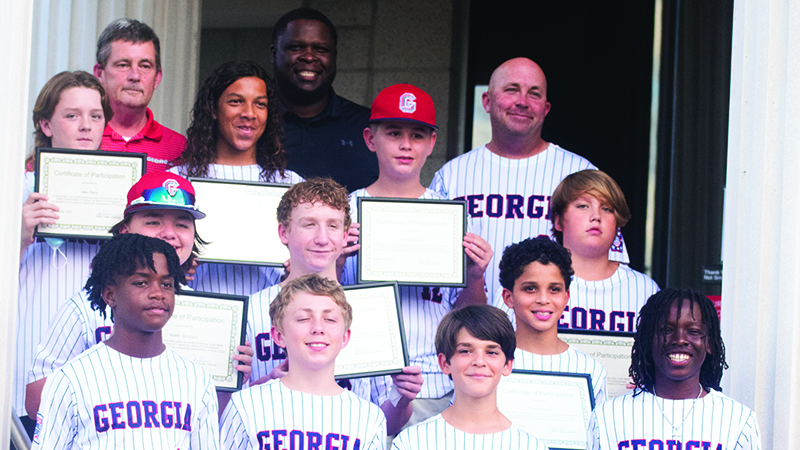 The Troup County Board of Commissioners gave the Troup County All-Star baseball team an out-of-the park recognition for their World Series victory in Laurel, Mississippi.

The team, consisting of 11 and 12-year-olds, represented Georgia and won the Dixie Youth World Series in August.

The team’s journey began in March at the George Harris Baseball Complex, said Kerry Whaley with the Troup County Parks and Recreation Department.

Whaley said he knew quickly that the group of players was special.

“I sat there in the score booth and watched three ballgames that day, and I called coaches and said ‘we have a chance to have a very good All-Star team,’” Whaley said.

There are a lot of things needed to make a good baseball team, Whaley continued, including talent, but good coaches and parents play a big role too.

“This team had every one of them,” he said.

Players were awarded certificates of participation by the county as county commissioners, players’s parents and coaches applauded them.

County Attorney Jerry Willis said he had a conversation with the national director of the Dixie Youth World Series, who told him he was astounded with just how talented the group was.

“There were over 150,000 kids signed up to play Dixie baseball from the state of Texas over to Florida and Virginia, and these players turned out to be the best of them,” Willis said.

Many of the players have now aged out of the program.

“Most of [the players] are 12,” Willis said. “Parks & Rec are going to miss them next year but the high schools are getting good baseball players.”

The team went undefeated in the World Series, and it finished 10-0 overall in the state tournament and world series.