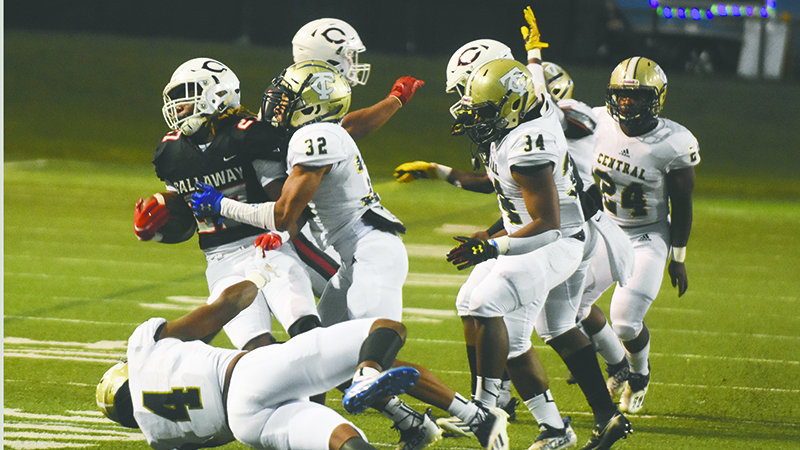 Even great teams struggle every now and then.

Thomas County Central methodically took advantage of Callaway mistakes for a 24-8 victory on Friday night over the Cavaliers. It was the first loss of the year for Callaway (4-1) and ended an 11-game winning streak dating back to last year’s state championship run.

Thomas County had a chance to make the lead even larger in the second quarter, but a fumble return touchdown by TJ Sanders was nullified by a facemask penalty by the Yellow Jackets.

Callaway’s next two drives ended in Yellow Jacket territory. The first was when a Deshun Coleman pass was knocked down on fourth down.

The next Cavaliers possession ended after looking very promising. Callaway reached the Thomas County 35 after a defensive offside penalty on first down, setting up first and five. Unfortunately for Callaway, the next three plays went nowhere, setting up fourth and five.

On fourth down, Coleman threw a pass to Carlos Billinglsea in the end zone, but Thomas County was able to knock it out of his hands to force the turnover on downs.

Thomas County responded by marching the ball right down the field. Callaway managed to hold the Yellow Jackets to a fourth and one at the 5-yard line, but Thomas County converted. Persean Taylor ran it in from four yards out on the next play, making the score 17-0.

Callaway answered by going right back down the field, but ran out of time. The Cavaliers reached the 5-yard line and even threw a ball into the end zone, but the ball was knocked down on the final play of the half.

Taylor added another short touchdown in the fourth quarter to make the score 24-0 as Thomas County put the game away.

Callaway’s JT Burks added a short touchdown reception in the final minutes to put the Cavaliers on the board.