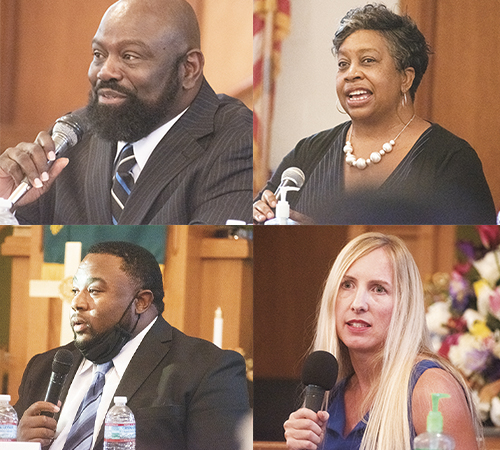 District 5 candidates Jimmy McCamey (top left), Norma Tucker (top right), Travis Hart (bottom left) and Kendall Butler (bottom right) all have ideas of what can be changed within the community.

The District 5 commissioner seat has remained empty since the death of Richard English Jr.

An upcoming special election will fill the seat in November, and five individuals are vying to claim it.

The candidates for the seat are Kendall Butler (nonpartisan), owner of F.L.I properties; Travis Hart (Democrat) an assistant minister and resident of District 5, Jimmy McCamey (Democrat), a clinical social worker in LaGrange; Norma Tucker (nonpartisan), a former member of the LaGrange City Council; and Ernest Ward (Democrat), a longtime educator who previously served as president of the local chapter of the NAACP.

Hart, McCamey, Tucker and Butler participated in a candidate forum at St. James Christian-Methodist church Thursday night. The event was hosted by the Troup County NAACP. Ward has a son on the Troup High Football team, which had a game Thursday night, so he was unable to attend.

Candidates were asked about their views on vaccine incentives and whether vaccines should be mandated.

Hart, who said he was fully vaccinated, said it is an individual’s right to receive a vaccine or not. In terms of giving incentives for others to receive the vaccine, he said he supports such ideas.

Butler shared the idea of bodily autonomy, noting that families needed to decide whether being vaccinated was beneficial to their well-being. She added that she did not believe a vaccine mandate was necessary from a governmental standpoint but said she would support business owners who choose to mandate vaccines for their employees.

McCamey, who said he was previously infected with COVID, encourages others to receive vaccinations and “follow the science” from those who have studied the virus.

Tucker, who said she was vaccinated, said she encourages others to get the vaccine. She said she works at the hospital two days a week and has witnessed the grief from staff and family members from those who have died. She also believes incentives should be encouraged.

Candidates were asked about their views on the dirt bike issues between citizens and the local law enforcement.

Hart noted that too many lives had been lost to illegal dirt bike accidents and that collaborative efforts between the county and other entities were needed to prevent such accidents.

Butler focused her question on the Troup County Jail’s high-inmate population and said services should be redirected toward educating the area’s youth, addressing poverty needs and creating a safe environment for them to grow up in.

McCamey suggested a county-wide committee was needed to address the issue and create safety protocols for riders. He added that someone gaining a criminal record from illegal dirt bike riding was unfortunate, but illegal riders needed to be held responsible.

Tucker said that dangerous behavior from illegal dirt bike riders should not be rewarded, but that amenities for riders should be considered. She added that the community needed to work together to keep children who were engaging in these kinds of activities from making wrong decisions.

Candidates were asked about their views on utilizing funds from the American Rescue Recovery Plan.

Hart said that collaborative support needed to come from local leaders so that the funds could be utilized effectively, whether that be in education, health or infrastructure endeavors.

Butler noted how some of the funds were already being utilized in local infrastructure and how such efforts needed to continue. She said that outside of infrastructure, the funds should be focused on addressing the mental and physical health issues brought on by COVID.

McCamey said with COVID still a dominant factor in society, funds should be utilized to assist with business recovery and education, especially for citizens who are participating in at-home learning.

Tucker said the funds should be utilized to better connect the communities so that resource needs can be addressed and allocated properly.

Candidates were asked about their views on housing opportunities and issues in District 5 and how they would address both.

Hart said that he wanted to use available resources to help people take ownership of their own communities and hold people accountable for rehabilitating homes in those neighborhoods.

Butler noted that Troup County, like many other communities in the country, does have a housing crisis, and that it has been ongoing long before the COVID-19 pandemic. She said that she has been pushing housing development in District 5 for several years and will continue to do so.

McCamey said the county needed to continue the recruitment process of bringing developers into the area and said it starts with having neighborhood pride. He said that there are areas of the county that needed rehabilitation and that the county, as well as the citizens, needed to work together to address these needs.

Tucker also noted that rehabilitation of communities started with citizens and encouraged residents to take initiatives to better their neighborhoods such as litter clean-ups.

The election will take place on Nov. 2.