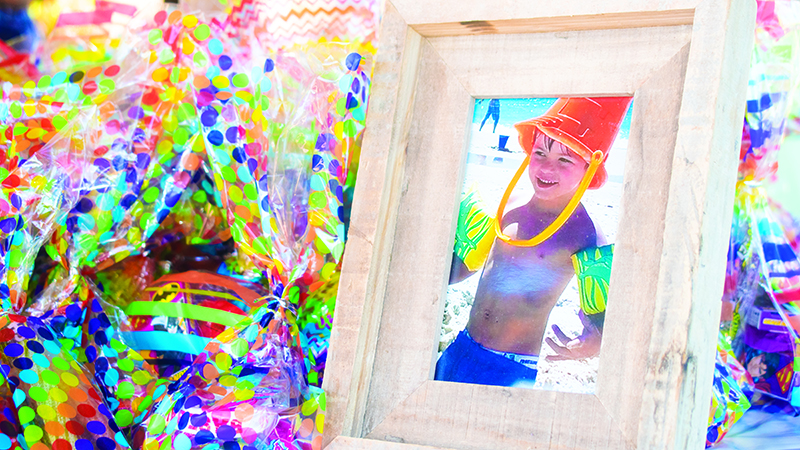 The party, complete with cake, party favors and balloons, was held in honor of Bradley Kennedy, a seven-year-old boy who died last December following an ATV accident. However, the day wasn’t just a day of remembrance for Kennedy’s family and friends. It was also a chance to honor the giving spirit the young boy emulated during his life.

Saturday would have been his eighth birthday.

“He’d had such a giving heart, and I know he would have loved to give back to the community,” said Michelle Scarborough, Kennedy’s “Granna” as he called her, who orchestrated the event. “Bradley loved whoever he was around, that’s who he was.”

The party event, which will be known as Gifts from Bradley, will be a yearly event for years to come, said Chase Kennedy, Kennedy’s father.

At Saturday’s event, the Kennedy family accepted over 100 toys of various sorts from the community, which will be given to area non-profits and foster parents to redistribute at Christmas time, Chase said.

“We’re taking it and putting a spin on it and giving back to the community,” Chase said.

“We’re going to try to keep everything local … [and give to people] Bradley might have known, his friends.”

Chase described his son in two ways. With him and his wife, Emily Kennedy, he was an outdoorsy kid who enjoyed hunting.

When he was with his mother, Kathryn Howard, and step-father, Addison Campanella, he was softer, preferring long days playing at the park and skateboarding.

Kennedy attended Hollis Hand Elementary School. Following his death, an award, the Bradley Kennedy Award, was set up in his honor and is given to a child each year.

Kennedy’s final words to his father were said at last year’s Christmas Parade in downtown LaGrange.

“It was just me and him, and his sister and his brother weren’t there, and the last thing he said to me as he got out of the truck was to make sure I did something with them since they didn’t get to go with us,” Chase said. “He was just a giving person.”

Near the entrance of the skate park rests a bench carrying Kennedy’s name and the dates of this birth and death, a permanent reminder of the short but meaningful life he led and the lives his family hopes he will continue to touch for years to come.

“I heard something the other day that said, in order for something to grow, it’s got to have a little bit of dirt and a little bit of rain thrown on it, so at the beginning, you feel like there’s no hope, but over time you start to grow,” Chase said.

“You don’t get over it, but you find more peace.”