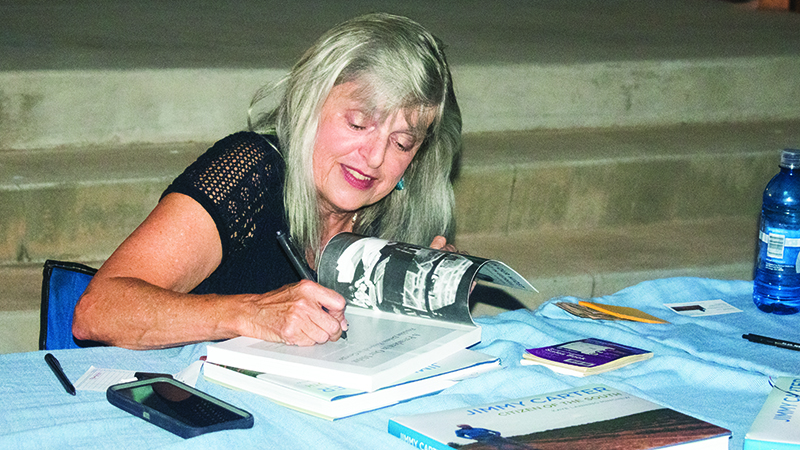 Kaye Lanning Minchew presented the ins and outs on her latest book: “Jimmy Carter: Citizen of the South” at the Friends of LaGrange Memorial Library’s Books and Brew event on Thursday night at Wild Leap Brewery.

The majority of the book focuses on Carter’s life in his post-presidency, Minchew said, and while his connections in Troup County are very few, some of the former president’s efforts can be seen in the area.

She pointed out that in 1978, home brewing was illegal.

In 1979, Carter President Jimmy Carter signed HR 1337, legalizing homebrewing at the federal level, ultimately saving the homebrewing movement. Minchew added that through her research for the book she found out that over 95 percent of craft brewers learn their trade from home brewing.

Carter, she noted, more or less preferred a single glass of white wine in lieu of beer.

During her talk, Minchew highlighted several events of Carter’s life that shaped him during and after his presidency, including the relationship he had with his “functional alcoholic” of a brother, Billy, his long-standing marriage with his wife, Rosalynn, and even a pot incident with Willie Nelson at the White House. Her book features more than 215 photographs that timelines nearly his entire life.

“I think Carter’s an interesting [man] with many layers, and he’s a tough one to get to know,” she said. “But I think I came close to capturing his spirit.”

Carter is also connected to LaGrange’s Habitat for Humanity program. In 2003, Carter and his wife, Rosalynn, visited the area when they were assisting with a number of Habitat homes being built in the area.

“Our main local connection is that we have plenty of local people who have supported him,” Minchew said. “I believe he was here for a hospital dedication in the early 1970s. Periodically, he went to Callaway Gardens.”

Minchew moved to LaGrange in 1983 and has since called the area home. She previously served as the executive director of the Troup County Historical Society and Archives for more than 30 years.

“Jimmy Carter: Citizen of the South” is her second book. In 2016, she released “A President in Our Midst: Franklin Delano Roosevelt in Georgia” in 2021 was turned into a documentary that was originally shown at the Southern Film Festival in LaGrange in August. before airing on Georgia Public Broadcasting in September.

Minchew decided to write the Jimmy Carter book after visiting the Little White House, she said, which took her three years to write in all.

Several years ago, Minchew attended a Sunday School Class at Carter’s church in Plains, Georgia and spoke with him only a few minutes, she said. She also met him in 1975, while she was an undergraduate at the University of North Carolina at Asheville, she shook his hand while he was campaigning in the area.

“He said ‘ya’ll study hard’,” she said. “In 2016, I spoke at the Chautauqua Event,” she said. “He was my opening act and he sat down. My niece saw him eating peanuts while I was talking.”