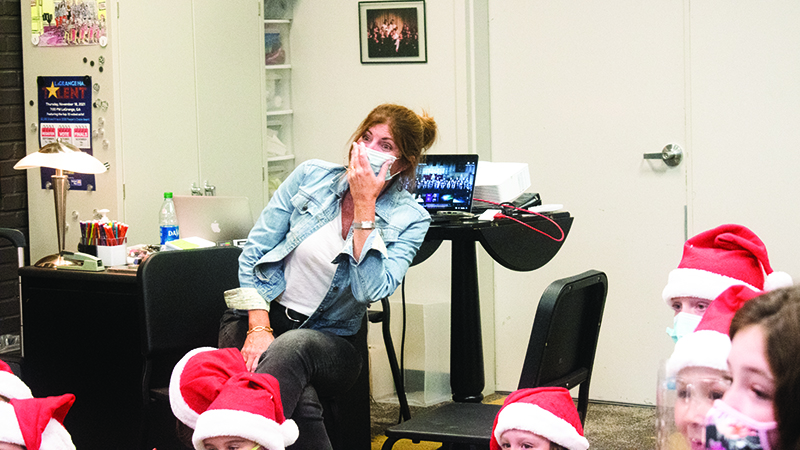 Above captures the moment Hardigree finds out she’s been chosen as the grand marshal of the 2021Christmas Parade.

The sound of jingle bells and Santa Claus’s laughter greeted Stacey Hardigree and her students at the Lafayette Society for Performing Arts late Tuesday afternoon.

Hardigree and her students thought the visit was a simple treat for them as well as an advertising opportunity on behalf of the LaGrange-Troup County Chamber of Commerce, but she had no way of knowing a surprise announcement was on its way.

Santa brought out his naughty/nice list to update children on their behavior status before the holiday season. Hardigree’s name was near the top of the list.

“What prize do I get?” she asked in jest.

Santa, a knowing look in his eye, shrugged.

“Well, you’ve been selected as the grand marshal for the Christmas Parade,” he said.

Hardigree instantly gasped and her students began to cheer, members of the Chamber trailing inside to make the surprise official.

“I’m so honored,” she said. “I’ve been going to that parade my whole life.”

Following a celebratory rendition of “Jingle Bells”, Hardigree escorted children to their waiting parents, who of course were rather curious as to why Santa was walking about LaGrange on a muggy September day. Afterwards, Hardigree, a LaGrange native, and the choir director and conductor of young singers at the LSPA, was still in shock.

“[The parade] has always been a fun tradition for my family and then for my children,” she said. “It really is an honor to be recognized and honored for the musical community in LaGrange.”

Being grand marshal is also a chance for Hardigree to honor the late Marty Davis, a friend and colleague of Hardigree’s who was a music teacher at LaGrange High School. Davis died in 2020 from COVID-19.

“It’s been such an honor to be a part of her legacy,” she said.

“I still feel like the weight of her loss every day, and every time I teach I think of her. I have her pictures in there and I just try to remember all the things I learned from her and her wisdom.”

The LaGrange-Troup County Chamber of Commerce made the announcement public on Friday.

The theme for the parade this year is “Magical Musical Christmas.”

“She’s very well-known in the community for working with children and young adults into Troup County,” said Leslie Traylor, director of member engagement at LaGrange-Troup County Chamber of Commerce.

Hardigree’s class has been learning about Christmas around the world, she said, and have been learning songs in different languages. When asked if they could be part of the parade as well, Hardigree said she would certainly try to make it happen.

“I want them to share it with me and ride with us,” she said. “It’s so special to see them so excited about it.”

The parade will take place Dec. 2. Interested residents can pick up parade float applications next week at the Chamber’s office at 111 Bull Street in Downtown LaGrange.