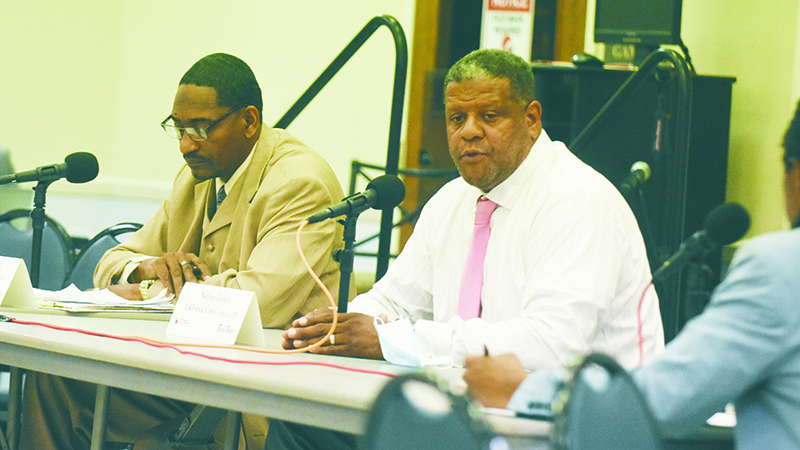 The second seat for LaGrange’s District 2 is up for grabs this year. Its current incumbent, Nathan Gaskin, and its challenger, Israel Prince Barsh, addressed the public during a forum Monday night.

Gaskin moved to Troup County in 1988 and began his District 2 Councilmember term in 2018.

Barsh is a lifelong member of LaGrange and serves as the chief executive officer at USA Global Office of Nonprofit Experts.

Walker, citing bestplaces.net, stated that LaGrange’s crime rate is ranked 42.8 while the US is 22.7. Walker inquired what candidates see as role as an elected official to address the crime rate and what is the responsibility of local law enforcement agencies.

Gaskin said that his role as an elected official is to ensure that laws of the land are followed and that the role of the police department is to be sure that such laws are followed.

He noted that in the United States there are many gray areas, referring to calls of mental breakdowns that he feels police officers should not have to respond to. He addressed the state’s lack of mental health assistance and resources.

He said that he felt the LaGrange Police Department was doing a “fine job” and that he supported them.

Barsh said that crime equates with education and economics and that education needs to be focused on more thoroughly for individuals from infancy up into their college years.

Walker inquired what candidates would do to foster cooperation and collaboration.

Barsh said fostering collaboration involves being in the streets with citizens and engaging personally with them. He said he is considering a team that would be present with hearing and addressing the needs of citizens.

“We have pain in our community that needs to be addressed,” he said.

Gaskin said joint meetings between government entities are essential to community collaboration, and that the city already has this with the county.

Walker inquired what candidates would do to address and improve the racial divisiveness in the community.

Gaskin said racial divisiveness is an individual matter that, in his opinion, can only be changed by changing hearts. He said racism is a learned behavior that needs to be addressed at a young age.

Barsh said racial divisiveness needs to be addressed at the highest level, including local governments. He suggested that monthly meetings between government entities and organizations could be formed to address such issues.

Walker asked candidates what they would do to increase and improve affordable housing in the area.

Barsh said that the issue lies with the lack of attraction of business into the area, which, he said, would help create more jobs, training and entrepreneurship opportunities in the area.

Gaskin said that he personally did not agree with the term “affordable housing” and that housing was a necessity.

He said that the first step in addressing such an issue would be to hold banks accountable.

“I disagree with the way housing is looked at. People need to live somewhere.”

Walker read several audience questions, the first of which asked if either candidate supported the city’s role in keeping neighborhoods maintained through grass-cutting and tree pruning.

Gaskin said he agreed with the city’s role in neighborhood maintenance, noting his own role in spearheading LaGrange’s litter pickup program “Leaving LaGrange Better Than We Found It,” but that it was an individual’s responsibility to contact the city to make sure the issue was addressed.

At this point during the forum, a disagreeing resident interrupted Gaskin, who responded “Nobody’s talking to you,” and “I am an elected official. Respect me. If you can’t respect me then leave.”

After a couple of minutes, the forum resumed, though Gaskin brought it back up in his closing arguments.

Barsh said he also supported the city’s role, adding that the city and citizens needed to work together to address any appearance issues in LaGrange’s neighborhoods.

Candidates were asked what they would do to address community homelessness and those who were living without utilities.

Barsh said addressing homelessness goes back to education. He said that the community needed to be “passionate with people” and address what resources they need.

Gaskin said that some people may choose to live without utilities but that he personally thought every home should at least have running water. In terms of homelessness in the area, he said that the individuals may be transients from outside areas. He said that it was essential to obtain necessary funds from the federal and state government to make sure what they needed to become residents.

Candidates were asked their opinions on Critical Race Theory, an academic concept that examines racism in social, cultural, and legal issues primarily as they relate to race and racism in the U.S. The issue is being removed from many school systems around the country.

Gaskin said he supported the teaching of Critical Race Theory, saying that it is needed to tell the truth of the county’s history with racism.

Barsh agreed that Critical Race Theory needed to be addressed and that all cultures needed to embrace the theory.