Only one candidate shows for West Point forum 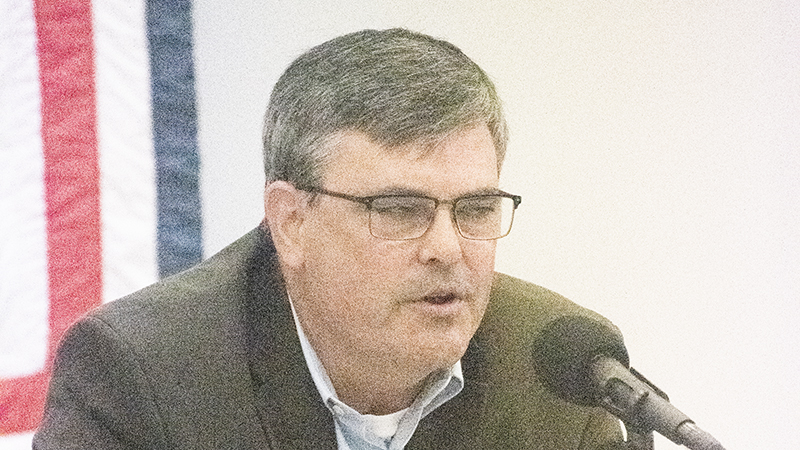 On Monday, a candidate forum was held for the West Point City Council race. It was presented by The LaGrange Daily News and The LaGrange Troup County Chamber of Commerce. Only one candidate, Joel Finlay, showed up.

During his introduction, Finlay said he was born in 1972 in Albertville, Alabama.

“I am one of four children, and I graduated from the high school there, Albertville High School, and went to Auburn University, where I got a degree in building science,” he said. “And I got a job right after that at Batson-Cook March 26 of 1996. The summer after that, I moved into West Point into small apartments, and I have called West Point my home ever since then. So, I’ve been a resident of West Point for 25 years.”

Finlay said he has two children who went to West Point Elementary, Long Cane Middle School, and graduated from Troup County High School. They are currently enrolled in the University of West Georgia in Carrollton.

Dr. Nigel Walker, the forum moderator, said the questions he would ask were developed by the forum committee and that no candidates had seen them in advance. Walker began by asking Finlay how he would use his position to improve the racial divisiveness in the West Point community.

Finlay said Walker’s question was a tough one and that he probably wasn’t “the smartest guy in the world” to answer it.

“Our nation is struggling right now, and I think everybody sees it from both sides, black and white,” Finlay said. “Racism is a contagious thing in some ways. And I do think that education, and I heard a minute ago during the forum we just listened to is trust. I think that is very important for both sides of the fence to trust each other.”

Finlay said that as a Scoutmaster, the African American friends and fathers of the Scouts he’s guided and mentored wouldn’t say he’s racist.

“How do you do that on a city-wide level?” he said. “I think you have community involvement on both sides of the fence and try to have support for each side.”

Walker said that on to bestplaces.net, crime is ranked from 1, the lowest, to 100, the highest.

“Troup County is ranked 30.7 while the U.S. is 22.7,” he explained. “What do you see as your role as an elected official, and what is the responsibility of local law enforcement agencies to address this crisis?”

Finlay said members of law enforcement need to do their jobs.

Finlay said kids imitate what they see. He said that while churches can have a good influence on children, the city can also provide similarly good influences.

Walker asked Finlay how he’d address the problem of children without good fathers.

“I would love to know the secret to that,” Finlay said. “When you’re sitting in an elementary school third grade program, and all of the kids get up there, and they want to be dentists and doctors and firemen and police officers, that drive to be a successful person diminishes somewhere around the seventh grade, and I sure would like to read up and figure out why that’s the case.”

Walker said thousands of jobs are projected to be available in Troup County and West Point within the next few years.

“Knowing that affordable housing, transportation, and skillsets are all factors in filling these positions, how would you address the workforce needs immediately and in the next five to 10 years?” he asked.

Walker said it’s “vitally important” for West Point and “county” to work together. He asked Finlay what he’d do to foster cooperation and collaboration among “all.”

“There’s 15 miles between West Point and LaGrange, and it may be the longest 15 miles in America,” Finlay said. “The city of West Point, we are a part of Troup County, and we love Troup County. But we also see that big brother’s up there just north of us that gets all of the cream of the crop. I would love for us to get our fair share of the tax dollars that are raised in the county provided to the citizens of West Point.”

“Imagine that the Troup County Parks and Rec in West Point is a beautiful facility that we have to spend over $100,000 a year in maintaining, and it’s not ours to maintain,” he said.

Finlay said that during his campaign, he talked about West Point Day with citizens.

““It’s mainly done in a certain area of the community that not a lot of white people live in, and how do we get the whole community involved in that?” Finlay said. “We had it downtown once or twice, I think, and it didn’t go so well, and then it got moved. Let’s not do that. Let’s bring the community together as a West Point Day and let it be everybody.”

Finlay suggested that West Point Day be hosted by the Parks and Recreation Department.

Another audience member asked Finlay what he’d do differently from what’s being done already. Finlay responded that he’d like to make sure the city spends its money efficiently and wisely.

During his closing remarks, Finlay said he’s seen West Point grow during an economic upturn and decline when “all of the technology stocks moved out.”

“I’d like to make West Point a place where people want to come and live,” he said.

“We need 20 and 30-year-olds that are going to be having children, that want to go and put their kids in our school systems. You have three options in West Point, depending on where you live. There’s a private school there locally, actually two private schools, and then [it’s] got two high schools that you can go to.”

Early voting will take place from Oct. 12 through 9. Election day will be on Nov. 2.

Hutchinson said he couldn’t be at the forum because the date conflicted with a previous commitment. He said he had told the people in charge of the forum ahead of time that he’d only be able to attend if they changed the date.

Marshall said her brother recently died and that his service was on Sunday.

“This is a difficult time for me and my family, and I was not able to come,” she said. “I’m still asking for votes and support from the citizens of West Point.”

Downs said he didn’t attend the forum because he was told masks wouldn’t be required and that many people would be present.

The forum was hosted by the LaGrange-Troup County Chamber of Commerce and broadcast on The LaGrange Daily News Facebook page. It can be rewatched on the LDN Facebook page.