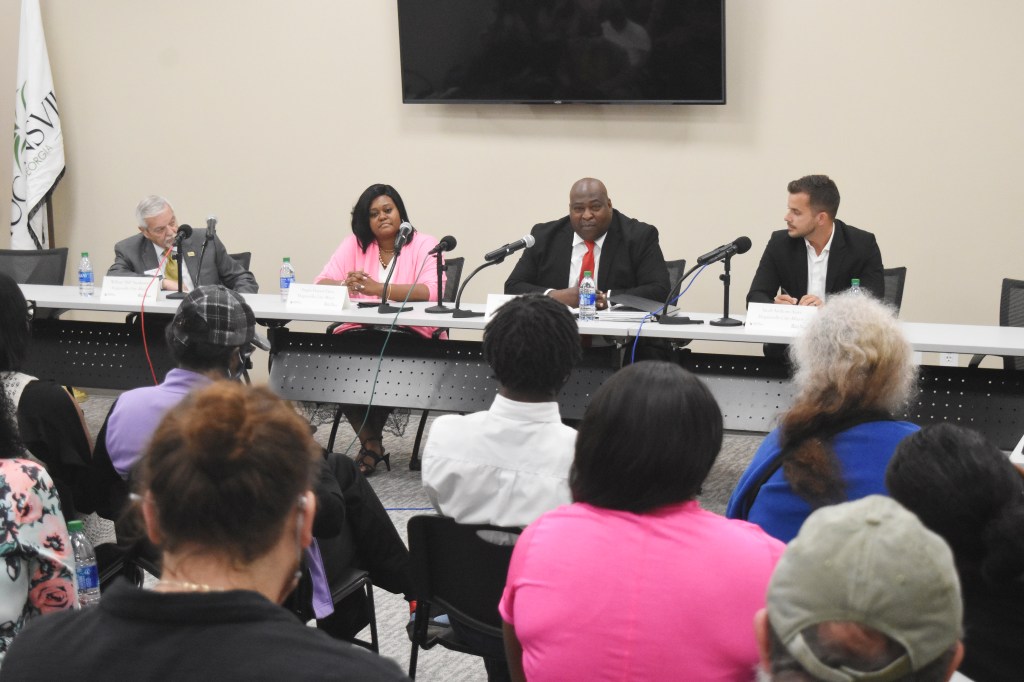 HOGANSVILLE – Candidates for the Hogansville mayoral seat addressed the public Tuesday night in a public forum organized by the LaGrange-Troup County Chamber of Commerce.

The forum was held at Hogansville City Hall but broadcast exclusively on The LaGrange Daily News Facebook page.

Current Mayor Bill Stankiewicz, who is seeking his third term, is the incumbent for the seat while Hogansville residents Angela Hopson Price, George Kenneth Bailey and Jacob Anthony Ayers are challenging for the position.

Candidate were first asked by moderator Kendryck Johnson how candidates would respond and prepare the community for expected population growth over the next several years.

Bailey said the city needed to continue to develop infrastructure and the downtown area.

Price agreed that the focus needed to be on the city’s infrastructure, but also that the city needed to focus on the citizen’s wellbeing.

“Right now, it is time that we work one-on-one with the citizens [and] start back rebuilding their trust in our city,” she said.

Stankiewicz said the city has worked for the past 14 years to develop the infrastructure to sustain the expected growth and has been seeking grants to address several infrastructure problems.

Ayers, noting his background in real estate, said a more thorough masterplan was needed to develop the appropriate infrastructure for the area.

“Growth for growth’s sake is not enough,” he said. “Anyone can come here can sell cheap dirt and build cheap houses [and] 10 years from now our community turns into a rental complex where most of the people who live here are not owners. We have to look at how we are developing those plans and how do we slow down some of these developments and let’s create a blueprint of what our city is and what we want it to grow into the next 10, 15 years.”

Candidates were asked what their roles would be to foster community relations throughout the city.

Price said she would encourage relationship building by attending meetings and relaying the information back to the community.

Stankiewicz said the city has been fostering relations not just county-wide but regionally as well. He noted Hogansville’s budding relationship with Merriweather County and its recent investment into Hogansville’s water treatment plan.

Ayers said collaboration came down to trust and that Hogansville needed to continue building relationships with neighboring cities and the counties.

Bailey said Hogansville was building “great” relationships with neighboring cities and the county through monthly meetings which he said he has been a part of.

Candidates were asked how they would address racial divisiveness in the community.

Stankiewicz recalled how racial issues were addressed between the mayors and county leaders in previous luncheons.

“We founded the Racial Trust-Building Initiative in Troup County,” he said.

“We have not done as much as we needed to do, but we’ve come a long way.”

Ayers said that racial trust was not just a Black and White issue, but an issue of residents of all races and cultures.

“I need to be leading by example and have personal relationships with people,” he said.

“It has to be true, trusting, deep relationships with the city.”

Bailey said the city was making strives to better address racial inclusion, especially with its city events. He said he is also a member of the Racial Trust-Building Initiative.

Price said that the first step to addressing racial divisiveness was to acknowledge it as a real, pressing issue within the community and then build on inclusion.

“We need to allow the citizens to see that we are working together and then we can start to divide these racial barriers by getting different people to work together,” he said.

Candidates were asked about their visions for Hogansville’s future.

Ayers said his vision was to create a great quality of life for all citizens, including his own children.

He said he wanted all citizens, no matter what part of the city they were from, to have access to safe streets, clean water and educational opportunities.

“In hindsight, I want a community where it’s easy to thrive,” he said.

“Are there quick solutions to problems? No. I think in this next season it’s going to take aggressive leadership to get us to where we need to go.”

Bailey’s hope is to develop the city as an iconic city.

“My vision for Hogansville [is] to make it a light-up city so that when you come down I-85 you’re going to know you’re here,” he said.

Price said she wants Hogansville to be “the heartbeat of Troup County.”

“I want Hogansville to be out of debt to the point where we’re not passing debt along to my grandbaby. I want us to be able to do it and do it quickly,” she said.

Stankiewicz noted the city’s history of debt issues. During his time as city manager, he had concerns that the city couldn’t make payroll every two weeks. Through issuing and paying off bonds, he said, the city has been able to relieve a lot of that debt.

Toward the end of the forum, candidates were asked a variety of questions from the audience, including the price of natural gas in city and keeping campaign promises.

Candidates were asked their views on corruption in Hogansville.

Price said the best way to fight corruption and build trust is to hold individuals accountable.

Stankiewicz said he personally did not know of any city corruption in the 22 years he’s lived in Hogansville.

“There been a few incidents when employees have done something they shouldn’t have, but that’s been dealt with,” he said, adding that he agreed with making others accountable for their actions.

Ayers said the key to combatting corruption was putting adequate people in positions of power.

Bailey said he supported transparency between leaders and citizens.

Candidates were also asked whether they thought whether having related individuals serve as mayor and on the council as conflicting interests.

Ayers, while acknowledging the possibility of inter-family conflict of interests, said he felt that the bottom line was that citizens would vote for those they trusted.

“I don’t have a problem with a husband and wife serving on this committee…I think if the people who vote for them trust them, they should do the best that they can,” he said.

Bailey that he was aware that other cities have husband and wife duos severing on committees and that he had no issue with the possibility as long as there were no bylines against it.

Price said she also felt citizens had to vote for candidates that they trusted.

“When you vote, you elect your councilmen, and you elect your mayor. So if you have a husband and a wife on the council, those are only two people, and one of them don’t get a vote,” she said, referring to the fact that the mayor only votes to break ties.

“Those other four are the ones who are going to determine what happens when that vote gets cast.”

Stankiewicz, while noting that there were no rules against relatives running for council positions while their relatives were serving, said he disapproved of related individuals serving on city council together.

“If this election goes the wrong way, in my opinion, come January, we might have a city council … where a mayor will call for a vote, and you’ll get a “yes” and one “yes, dear,” he said. “I think it is absolutely a conflict of interest.”