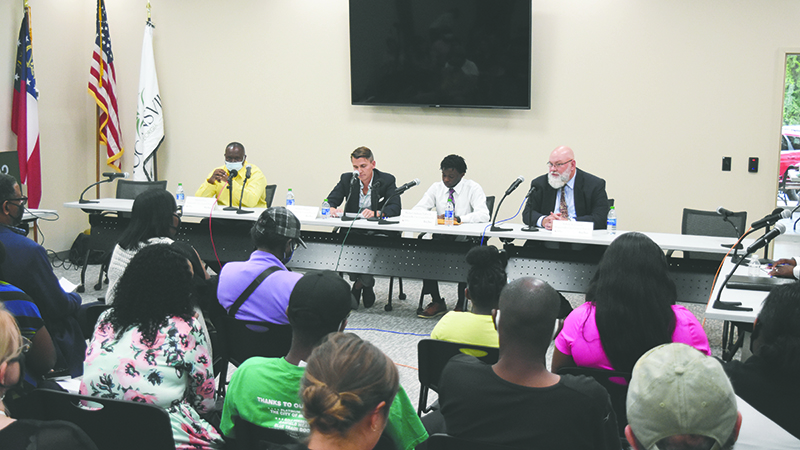 HOGANSVILLE – An election forum was held in Hogansville Tuesday night for four candidates vying for seats on the Hogansville City Council.

The night began with the forum for Post 1 between Robert “Bobby” Conway, a third-generation Hogansville citizen, and Michael Anthony Taylor Jr., a lifelong resident of Hogansville. The council seat is currently held by incumbent Reginald Jackson who is not seeking re-election.

All four candidates answered questions at the same time.

Moderator Kendryck Johnson began the forum by asking candidates their thoughts on Hogansville’s poverty rate, which, as cited from citydata.com, is 23.4%. Georgia’s poverty rate is 13.4% across the state, he noted.

Taylor said he’d address the issue by “meeting residents where they’re at” and he would work with the county to create jobs and address the utility needs in the area.

“If you want to bring everybody up, you’ve got to have better paying [jobs] and better job training,” he said, adding that Hogansville needed to have better partnerships with public and private companies. “We’ve got to reach out to them [and] be the loudest voice.”

Price said Hogansville needed to work more efficiently with the county so that when industrial jobs moved into the area, they would be more targeted to the Hogansville area to lessen commuting time.

Conway suggested that the city should invest in better high-speed internet options to assist residents, like himself, who work from home.

Candidates were asked for their views on fostering community collaboration between local leaders and county leaders.

Morgan said everyone “should have a seat at the table” and that representatives of all social levels should have input in community decisions.

Price said the community needs to come together for a greater outcome, despite how some may “agree to disagree.”

Conway said that Hogansville needed to “foster movement” and bring more people in as the city grows.

“We’re about to boom … [people] aren’t going to want to commute to Newnan,” he said.

Taylor suggested monthly meetings between the county and the other cities to improve communication with Troup County.

Candidates were asked what they would do to improve affordable housing opportunities in the community.

Price said Hogansville needed to make sure that, when pursuing housing development, that “the price is right” on homes in order to prevent pricing out current and future residents.

Conway suggested raising the job market to combat low wages and educating homeowners on available housing programs. He noted that on a city government level, controlling the housing market was harder to do.

“We need to take care of what’s here and make the homes energy efficient, smaller and affordable for the people,” he said.

Morgan as well suggested educating homeowners on available programs while also bringing in job growth to improve the quality of life.

Conway said that he himself was on an equalized billing system where he usually paid the same amount on utilities each month. He said as the city’s population grows, utilities may go down.

“You’ve got more people sharing the load,” he said.

Taylor said he would direct residents to utility assistance programs and also work with city council members to address the high rates.

Morgan said he would support a third-party audit to catch any mistakes that might be made. He also suggested better communication between the city and residents on their bills

“When the customers [aren’t] getting the message, it’s not the citizens’ fault,” he said. “It’s your job to communicate to them until they understand.”

Price said customers should watch their meters to check for rising usage and that residents should communicate with landlords to make their homes more weatherized.

At the end of the forum, candidates were asked a series of audience questions, including what they would do differently than the incumbent of their sought-after seats.

Taylor said he would work with residents on all available levels.

Morgan said he would focus on communication and transparency, something he felt the current leaders weren’t doing effectively.

“Maybe the skills aren’t there or the knowledge isn’t there, but I want to bring my knowledge of communication,” he said. “You have to use every channel available, whether it’s putting something in their utility bill or on Facebook or sending them an email.”

Price, the incumbent for his seat, suggested reaching out to the community quarterly so the council could hear directly from the public.

Conway said he’d be out in the community more and work with both county and state officials to promote changes.