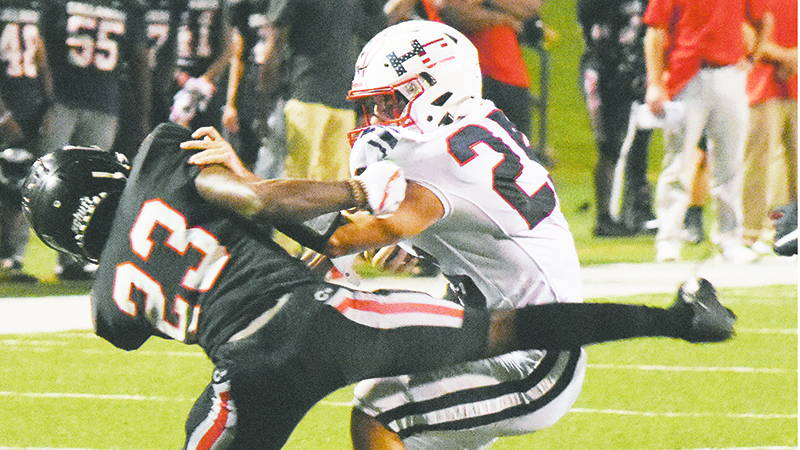 Haralson County took advantage of early Callaway mistakes and were the more physical team in a 42-14 victory Friday night at Callaway Stadium.

The Rebels scored on their first four drives to take a 28-0 lead during a one-sided first half.   Callaway had two turnovers on two consecutive plays — an interception and then a fumble on the ensuing possession — that set up two of Haralson County’s touchdown drives.

The Cavaliers made it interesting in the third quarter, as they scored on the first two drives of the second half.

On the first, Deshun Coleman connected with Carlos Billingslea on a 12-yard touchdown pass to pull Callaway within 28-7 early in the third quarter.

Then, for the first time all night, Callaway forced Haralson County to punt on its next drive.

Later in that same drive, on a key fourth down, Coleman again connected with Smith to get Callaway to the 7.

Kier Jackson did the rest, scoring on a 7-yard touchdown run to make the score 28-14 with two minutes to play in the third quarter.

But quarterback Clay Hyatt refused to let Haralson County lose. He scored four touchdowns on the night and helped lead the Rebels back down the field for a score to break Callaway’s momentum.

JoJo Chandler scored on the 30-yard run to cap the drive, making it 35-14. Coleman was sacked on fourth down on the Cavaliers’ next possession, setting Haralson County up with a chance to close it out.

Hyatt did just that, leading the drive and capping it on a 1-yard touchdown run.

Callaway will travel to Bremen next week in another key AA, region 5 game.