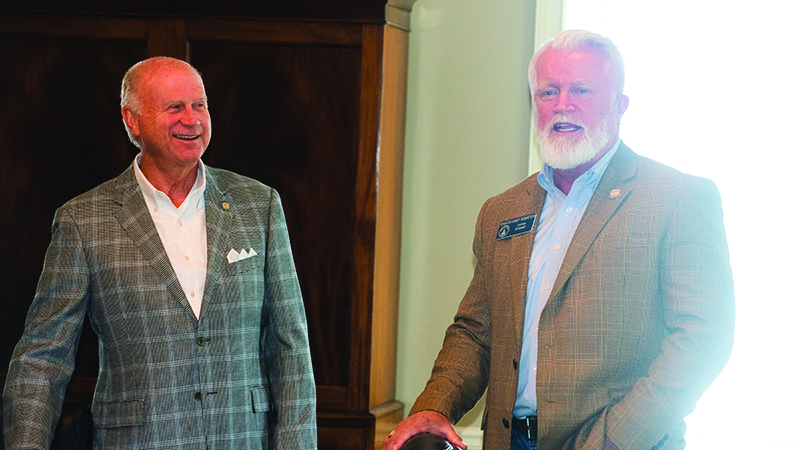 Sen. Butch Miller describes himself as three things: a Christian, an “unashamed” conservative and a “daddy”.

“It’s easy to be a father, it takes work to be a daddy,” he specified as he spoke about his sons to the audience who visited him at the Troup-LaGrange Chamber of Commerce Friday afternoon where he held a campaign meet and greet, introducing himself to leaders such as Mayor Jim Thornton, Sheriff James Woodruff and Commissioner Ellis Cadenhead.

The seat is currently held by Republican Lt. Gov Geoff Duncan, who stated earlier this year that he would not seek another term. Miller acts as the only candidate for the seat so far.

On top of supporting law enforcement and education, retaining “strong family values” is one of his main goals as he seeks the position of Lt. Governor for the state of Georgia. His ultimate push is to retain conservative values for the state.

However, he noted his lack of bitterness towards those of the opposing Democratic party, describing all 56 individuals of the Senate as “unique personalities” who needed to collaborate for the sake of making decisions for the state.

“We have to find the common ground … that’s what I intend to do,” he said.

Miller has served as Senator for District 49 since 2010 and President pro tempore of the Georgia Senate since 2018.

One of his credentials, he noted, was pushing the Election Integrity Act of 2021, also known as Georgia Senate Bill 202, which mandates voter identification requirements on absentee ballots, limits the use of ballot drop boxes and expands early in-person voting. He described the bill as a “good move” for Georgia.

“It’s best for both parties, for the people and for the state,” he said.

One of his biggest pushes, he said, will be to encourage Georgians to get back to work, noting how Georgia is #14 in terms of having a strong economy.

Miller owns Milton Martin Honda in Gainesville and said he had firsthand experience with economic hardships both on a personal and business level.

“One year, we lost the shirt [of the business]” he recalled, eluding to the business’s financial troubles. That year, just before Christmas, he borrowed $3,600 from the bank with the intent of giving the company’s 36 employees a $100 bonus before the holiday, knowing he would have to lay a good many of them off. He would end up cutting 10, he said, but he persevered.

“I’m willing to work hard get the job done,” he said.

Miller and his wife, Teresa, have three sons, Cole, Cary and Charlie.