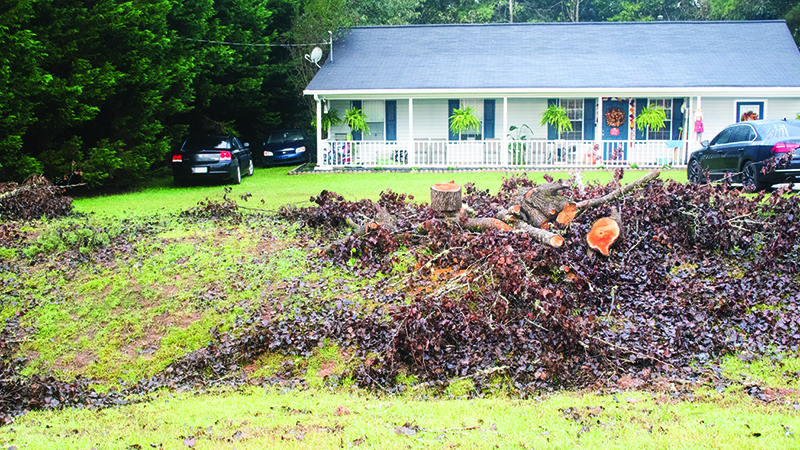 Above shows the aftermath of Southern Line Contractors cleanup efforts on Hogansville resident Jessica Pike’s yard Friday morning after tree debris, the aftermath of utility line maintenance, sat in her and several neighbors yards for three weeks. The company is set to return to finish cleaning her and her neighbors’ yards next week.

HOGANSVILLE – For three weeks, residents along Mountville Hogansville Road have had huge piles of debris in their yard as crews made during routine tree maintenance.

Finally, after many emails and phone calls, most of the debris is gone, but area residents aren’t happy.

Jessica Pike, who has lived on Mountville Hogansville Road for 18 years, said she was told on Sept. 23 that the piles would be picked up the next day.

But they were never were, and then the days started to pass by.

Southern Line Contractor Inc. owner Garred Morsch said Friday that his company, which is contracted out by Diverse Power, was performing routine tree maintenance on the utility lines on Sept. 23.

Originally, Morsch said, Pike and his crew had an agreement to leave the debris on her property but later agreed to pick it up. The trees that were cut down were on property as well, he added.

“[Pike] agreed to leave the branch repairs on the property if we dropped the entire tree because we were just pruning the power line,” he said. “[The crews] were on her property [Thursday] picking them up.”

Morsch said rain had slowed crews’ cleanup efforts but that they would be returning next week to finish the job.

Pike said she’d recently seeded her grass prior to the pruning and now has dead, rotting grass and a broken water meter. She has also seen rodents and bugs crawling around her yard, which she thinks came from the wet, dead leaves in her yard.

“My meter has yet to be read, so now I’m going to be double-billed on my next bill,” Pike said.

Hogansville Mayor Bill Stankiewicz said he received a report Thursday morning that all the debris had been picked up, and he visited the area later that day and spoke to Pike, apologizing for the delay in the cleanup.

He said the city would do its part to fix the problem.

“We will make right any damage caused by this,” Stankiewicz said.

On Thursday, crews with Southern Line Contractor Inc. began to clear away thick piles of tree limbs and chunks of trunks that were cut down and left in residents’ yards.

The crews returned once more Thursday to begin clearing debris from about 10 yards, which each had varying-sized piles of debris.

Pike and several of her neighbors consented to the tree maintenance when it began, she said. She displayed video footage from her Ring doorbell timestamping the conversation she had with crews the day the maintenance took place.

Pike said she was told by crews that they would return the following day, Sept. 24, to remove the debris, but they did not return.

“[A crew member] told me [his] boss man said [he] had the approval to cut all the trees down but they’d have to bring their truck back to pick the trees up and that [a different crew] be back that evening,” Pike said.

Pike’s neighbor, Kerry Cothran, who has lived on Mountville Hogansville Road for over five years, also had problems in her yard. She as well had trunks of trees in her yard that were removed Thursday.

She said she’d seen an increase in gnats and ants as well and flat-head worms that she previously had not seen on her property before. At one point, the Hogansville Police Department visited her residence to ask about the debris on her lawn, she said.

Pike gave the LDN emails that showed she had reached out to Hogansville Mayor Bill Stankiewicz and City Manager Jonathan Lynn.

Stankiewicz said that the city contracts with an outside company, C&C Sanitation Services, to maintain tree growth around its powerlines. In the past, the city has followed those crews to pick up left behind debris, but C&C Sanitation Services currently handles it. In this instance, Diverse power contracted Southern Line Contractor Inc. to prune the trees.

“The crews were supposed to pick up the debris, but they did not,” he said, adding that when he spoke to Diverse Power regarding the matter that he was told crews were held back due to weather conditions.

As piles of the debris sat in her and her neighbors’ yards, Pike said that the smell of rotting leaves and what she believes was mold began to perorate from the piles, which concerned her because both her and Cothran have children with asthma.

“I really need this finished,” she said. “I told [Stankiewicz] they left a mess, there’s mold, and I have family coming down so this is very embarrassing to me.”

Pike spoke to Morsch Friday, she said, and was told the debris would be cleaned from her yard by Monday.