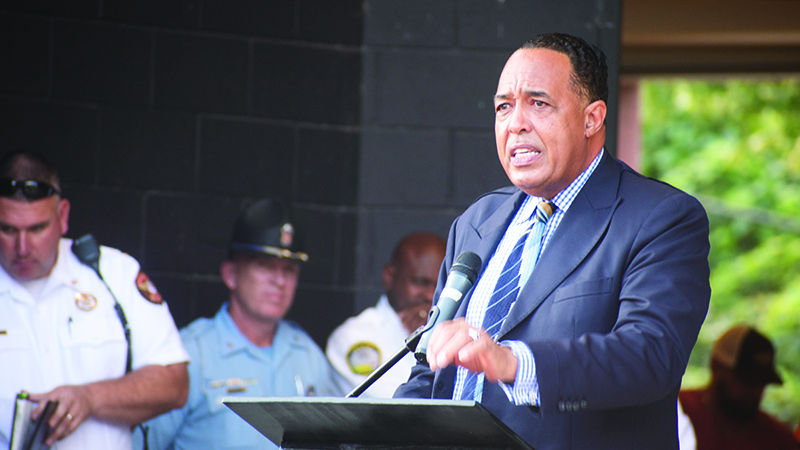 Dr. W.T. Edmondson shares the changes he’s seen between LaGrange citizens and law enforcement during his experience in the community.

Local law enforcement and citizens came together Sunday at Sweetland Amphitheater for the Faith & Blue event, a chance for the community to hear directly from the police officers who represent and protect Troup County.

Law enforcement and citizens have the ability to balance out the functionality of a community, noted Capt. Nathan Taylor of the Troup County Sheriff’s Office.

With this phrase, Taylor reminded the community of the police response to the recent murder of Akeila Ware and her unborn child. The community hurt for the loss of them both, Taylor noted, but rejoiced for the apprehension of her alleged killer.

“Several of our investigators shared with me their emotions and their feelings they experienced while investigating [that] horrific scene. Just like many of you, they shed tears,” Taylor said.

“And just like you, they rejoiced when her [and her baby’s] killer was captured.”

This connection of grief and healing is a focus local law enforcement hopes the public can embrace rather than the divisions often seen between them, Taylor said.

The purpose of the National Faith & Blue event is to create safer, more inclusive communities by connecting law enforcement officers and residents they protect while intertwining the roles of local faith organizations.

Along with Taylor, other local law enforcement personnel as well as local leaders spoke on the balance of order and attentiveness it brings into the community.

Dr. W.T. Edmondson, LaGrange councilmember for District 2 and senior pastor at Bethlehem Baptist Church, noted how “blessed” the county was due to the functional relationship between law enforcement and residents.

“We have not had a lot of the problems a lot of other areas have had,” he said. “Why? Because we have had proper training. Our officers have been trained well, and we are so grateful for that.”

He noted how municipalities like the LaGrange City Council have made strong relationships between not only local law enforcement but outside agencies such as Georgia State Patrol.

“I’ve been on council for over 20 years, and I’ve seen LaGrange change tremendously,” he continued. “I’ve seen the safety of LaGrange continue to go up [and] the crime rate continues to go down.”

LaGrange Police Department Chief Lou Dekmar spoke of the ties faith, family and community have in his department. He also spoke about other communities around the country who face a police vs. public divide.

“Those ties are much stronger than those loud voices that you hear around the country when they talk about [defunding] the police and not [supporting] the police,” he said.

Law enforcement in the area has not had those kinds of calls, he noted.

“Faith & Blue is about emphasizing those ties and doing so challenges us as a community to address those issues that frustrate us and cause harm,” Dekmar said.

As a police department, that emphasis means being transparent with the community and reviewing its practices regularly. Dekmar said his department strives to enforce the law in a way that helps keeps citizens safe while arresting those that victimize others and protecting the most vulnerable.

“We take that role very seriously, which is why we have partnerships that extend to 70 different nonprofits, government agencies and faith groups.”

Those relationships have built entities such as the Mental Health Corp that later earned state funding a year after its founding, Dekmar noted. Additionally, those relationships helped create the area’s Warming Center that offers services to the homeless.

Such collaborative efforts are what being a community member in blue is all about, Dekmar said.