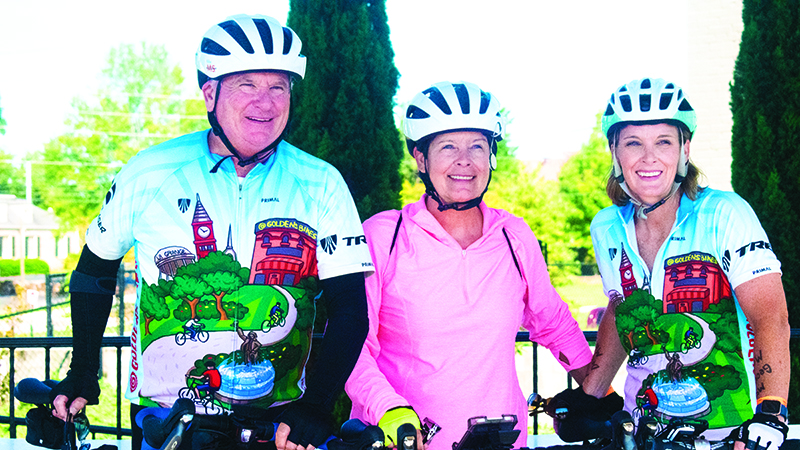 The Bike MS: Atlanta Peach Ride has become a familiar event each fall since its first fundraiser in LaGrange in 2015.

For one LaGrange family, it is more than just a charitable ride for individuals with multiple sclerosis. It is a personal triumph.

Pat Hambey was diagnosed with multiple sclerosis in 2001. Despite dealing with the condition, which affects the nerve endings throughout a person’s body, she considers herself fortunate.

“I have a lot of tingling sensations, and I’m on a weekly injection of very strong medicine that has kept mine under control,” Hambey said, adding that some of the harder bouts with the disease included temporarily losing vision in one of her eyes and having burning sensations in her hands and feet.

In the initial stage of her diagnosis, Hambey tried several drug therapy methods to deal with her symptoms. She finally found one that made them manageable, she notes, and she’d been able to co-exist with the disease for 20 years now.

Hambey alongside her husband, Thelon Hambey, and daughter, Lucy Wynn, participated in the ride over the weekend. On Saturday, they rode the 65-mile race and then the 35-mile ride on Sunday, nearly totaling 100 miles for both days.

The Hambeys have participated in the LaGrange ride since it came to the area, excluding last year’s virtual ride that resulted from pandemic restrictions.

They ride not only for Pat and the cause but for other loved ones and co-workers who are also affected by the disease, as demonstrated by names written in marker across Wynn’s arms.

Biking has been a beloved pastime and therapeutic module for her and her family during and after her diagnosis, she said. She and her daughter began biking for exercise in the dark confinements of their local gym’s basement following her diagnosis. Shortly after, a Pedaling for Kids biking event came to Columbus and the Hambey’s decided to purchase their very first bicycles and gave it a shot. Now, the Hambeys participate in charity rides when they can on top of their leisure biking activities.

“It just got in our blood … and this [race] is dear to our hearts because I have MS,” Hambey said.

“Yesterday’s rides went all around West Point Lake,” Hambey said. “Today, we went out in a different direction and [saw] farmlands and cows and pastures. It was so pretty.”

She and her husband have lived in LaGrange since 1993 and have traditionally stuck to areas like the Thread when biking locally. They are constant customers at Golden Bikes in downtown LaGrange, which assisted riders with bike maintenance needs during the ride.

The race overall brought in well over 300 participants this year, said Paul Nevil, the event direction manager for Bike MS. Most importantly, as of Monday, it also raised $305,000 — just over the $300,000 goal. All funds will go to the National Multiple Sclerosis Society for research on better medical options and, perhaps one day, a cure.

“The hope is that they would be able to find a cure, but if not at least find drug therapies that [help], like in my case,” Hambey said.

In the meantime, she and her husband both suggest biking as a coping exercise and maybe join a biking event to boot.

“I’d suggest it to anyone, really,” Thelon said.