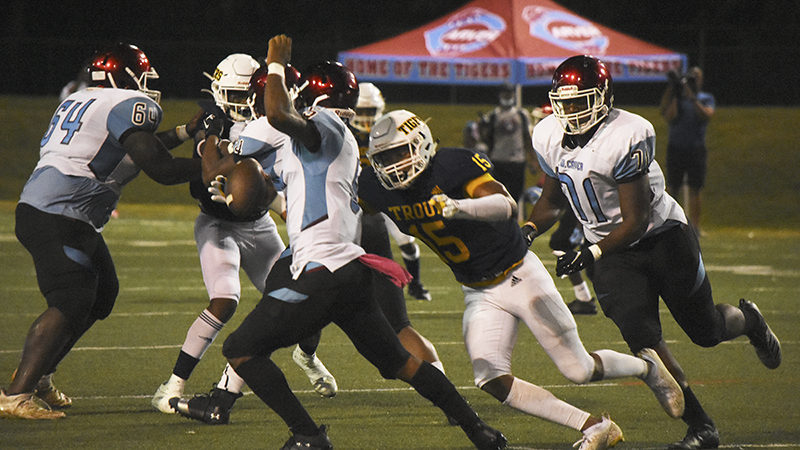 In a battle of Tigers for first place in class AAA, region 2, Carver left little doubt who the top team was Friday night.

Carver (6-0) led from start to finish in a 36-0, dominant win over Troup (6-2) at Callaway Stadium. The visiting Tigers scored on the first play from scrimmage on a run left end by Jaiden Credle to take a quick 6-0 lead after a failed two-point conversion was shut down by Tae Shells.

On the next kickoff, Troup mishandled the ball and ended up backed up at its own 5 yard line. After a quick three-and-out, Troup had to punt.

Carver appeared to be in trouble twice early on during the ensuing drive, but managed to convert a third-and-eight. Troup then jumped offside on third and three, giving Carver another first down.

That moved the ball inside the Troup 30, but Carver was quickly moving backward after a false start and a holding call.

It didn’t matter. Quarterback Devin Riles rolled to his right, then suddenly spun back around and threw the ball back across the field to a wide open receiver, who picked up one block and ran almost completely untouched to the end zone to make the score 12-0. The two-point try was good, making the score 14-0.

Troup had to punt again, and Carver responded quickly despite being backed up. Two plays later and Carver was back in the end zone and up 22-0.

Carver added two second half touchdowns to add some cushion and the clock ran in the fourth quarter.

Second place in the region will likely be decided next week against LaGrange at Callaway Stadium.