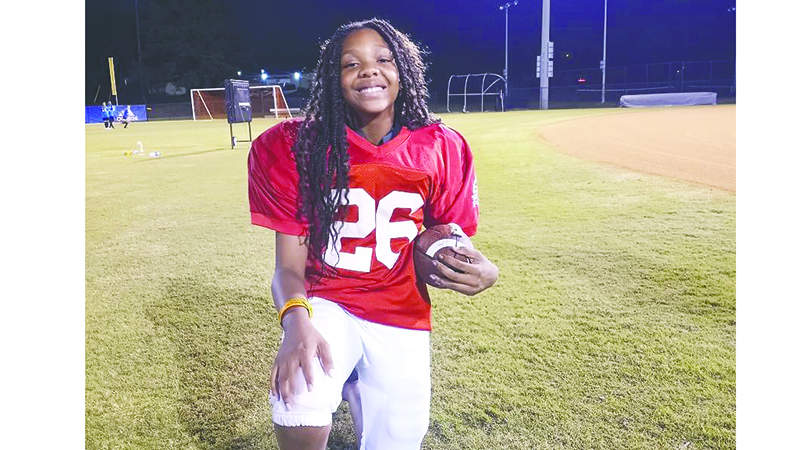 At 10 years old, Brooklyn Render is already making some history.

Render, a West Point Elementary School student, is believed to be the first girl to ever score a touchdown playing in a contest for the West Point Recreation Department. Render plays for the Raiders, who beat the Seahawks 34-0.

Render scored the touchdown on her second attempt. She plays center on offense and defensive tackle when on defense.

“I was kind of scared, but I wasn’t. The first time I was running it, they got me. Then the second time I made, and it was really exciting,” Render said. “All of the boys on my team were really excited for me.”

Render’s mother, Theresa Flemming, reflected on what it was like to watch her daughter score the touchdown.

“When she did the play again, it didn’t matter to me whether she scored or not, she did good just running the ball,” Flemming said. “But, the fact that she scored, I was overjoyed in that moment. I’m very proud of her for achieving that.”

Render plays a variety of sports with the rec department and her mom even coached her in basketball. Flemming said it was tough for her daughter to convince her to let her play football.

The choice was easy for Render though.

“Because I’m really not that type of girly girl for real. And then it was soccer. And I didn’t want to play that because I lost interest. I decided to play football,” Render said.

Render is also interested in playing football when she attends Long Cane Middle School next fall.

The football team she currently plays on is co-ed, according to  George Green, the athletic director for the rec center.

“There have been girls in the league before. She’s the first one we’ve had in West Point in a long time,” Green said.

Her coach, Alanteo-Henry Hutchinson, said he told Render to have fun.

“From the get go, I had a talk with her when she first came, and I told her ‘hey just have fun for the most part,’ and she’s been really good,” Hutchinson said. “I haven’t had to adjust my coaching style or anything like that because of the way that she’s reacting, and she’s performed.”

Hutchinson said he hopes Render inspires other girls to try the sport as well.

“We hadn’t really had a reaction from other teams, but we will have a reaction from other kids that notice. She is well-known to some of the kids, and they realize that she’s actually playing and you know, they think that’s a big idea, which it is. It’s a big thing,” Hutchinson said, “I really think it will make it more attractive for girls that want to play football, and I kind of hope so because I think it’s a good experience, especially in rec.”

The Raiders will play Saturday, Oct. 23 and Monday, Oct. 25. They will then continue on to the playoffs next weekend.