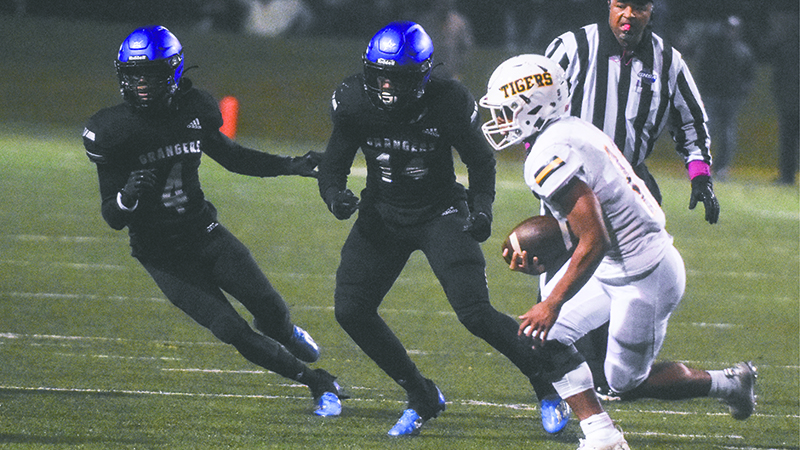 There was a lot on the line Friday night when county rivals LaGrange and Troup met at Callaway Stadium — a home playoff game and county bragging rights being at the top of the list.

Troup (8-2) dominated the game from start to finish in a 35-14 victory, the Tigers’ sixth consecutive victory over the Grangers (7-3). In a year where both teams are headed to the playoffs, there was a lot of talk around town about LaGrange finally putting an end to that streak.

Tigers Head Coach Tanner Glisson made it clear his team had heard that talk.

“The pressure was on us after winning five in a row, and for some reason we were getting a lot of people doubting us,” Glisson said. “Six in a row against these guys is tough to do. We’ll take that and move on and get ready for the playoffs. Our guys had a good plan. There’s no doubt who the best team was tonight.”

The Tigers lit up the scoreboard first on a 13-yard touchdown run by quarterback Taeo Todd around left end with 11:37 left in the second quarter.

LaGrange’s next drive started with a run of more than 20 yards by quarterback Tae Snead, but the Grangers went four and out from there.

Troup had to punt on its next drive, and LaGrange answered by driving the ball onto the Tigers side of the field again. Snead connected with Magic Johnson on a huge third down deep in Grangers’ territory to keep the drive going, and LaGrange eventually moved the ball inside the Troup 40.

However, the promising drive ended when the Grangers fumbled and Troup recovered with 3:32 left in the second quarter.

As a misting rain started to fall at the stadium, Troup took control of the game for good.

On one of the first plays of the ensuing drive, Todd ran the read-option, kept the ball, broke a tackle in the middle of the defense and ran down the home sidelines for a 79-yard touchdown.

Things didn’t look good for LaGrange on its next drive either, but the Grangers made a play to stay in striking distance. After starting deep in their own territory, the Grangers were faced with a third and 15. Snead felt pressure and was flushed to his right. Somehow on a play that felt like it took forever to develop, he found Tristan Smith wide open near the sidelines and Smith did the rest, rumbling 67 yards for a touchdown to bring LaGrange within 14-7.

Unfortunately for the Grangers, it was one of their only highlight plays of the night.

The score remained there until Troup methodically drove down the field for another touchdown.

Todd ran right end inside the 20, then finished the drive with a 7-yard touchdown scamper to make it 21-7. The Tigers controlled the line of scrimmage most of the night.

“Any time you can do that, you have a chance to win,” Glisson said.

After a Granger punt, Troup had a touchdown called back due to holding. The Tigers — again — methodically drove the ball down the field. Faced with a third down, Todd connected with Noah Dixon, who went up over the defense, to move Troup to the 1-yard line.

Two plays later, Todd added his fourth touchdown of the night with 3:23 left in the third quarter.

In the fourth quarter, LaGrange added a score on a 2-yard run by AJ Tucker with 8:13 left in the fourth quarter. The touchdown was set up after a controversial call, where a LaGrange fumble was recovered by the Tigers. However, the wide receiver was called out of bounds on the play, though that did not appear be the case.

Following the LaGrange touchdown, the Tigers got the ball back after a failed onside kick and attempted to run out the clock. The Grangers refused to give up, stopping Todd on fourth down at the Troup 37.

Needing two scores to tie the game, LaGrange went to the air. On one of the first plays of the next drive, Troup’s Tyson Duncan tipped a pass and intercepted it, running it back for a touchdown to put the game completely away — sending the Tigers student section into a frenzy.

“He’s done that all year,” Glisson said of Duncan. “Anything we’ve asked him to do, he’s always been the first one to raise his hand and go do it. I’m just so happy for him and this senior class.”

The win cements the Tigers as No. 2 in the region, while LaGrange will play Hardaway next week with No. 3 in the region on the line.