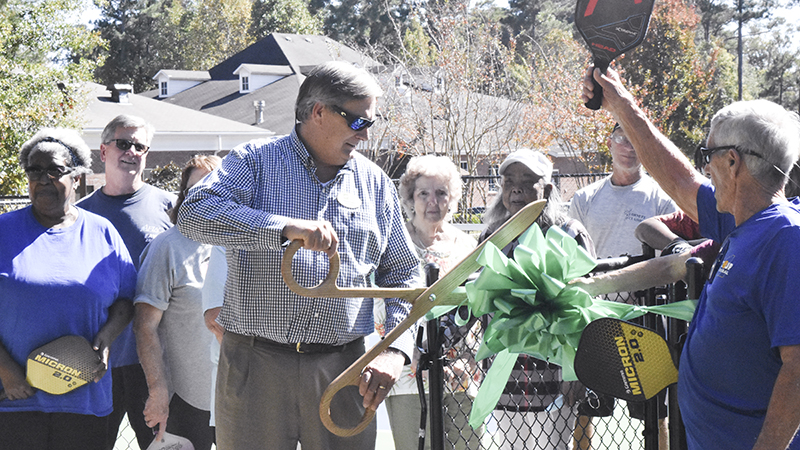 Two pickleball courts opened up to the Troup County community on Wednesday at 140 Ragland Street, LaGrange, GA 30241. The courts will be used by the LaGrange Active Life during the day, but the courts are open to the public after 4 p.m. on weekdays and all day weekends as well.

Tony Martin, a member of Active Life and winner of a recent pickleball tournament, said this means a lot for their community.

“It certainly beats playing inside on the court that we’ve laid out for and been playing on for the last three years,” Martin said. “This is just a blessing really for us. And I think that you’re going to see a great deal of growth in pickleball here and in Troup County as a result of this. Hopefully, eventually, we’ll be staging some tournaments.”

Dan Wooten, the manager for Active Life, said pickleball proves to be a good sport for the Active Life members overall.

“They just have a great time. They’re laughing when they’re playing. Some of them are real serious, some of them play just for fun. But the people that are better teach the others,” Wooten said.

“Again, it’s just great exercise. And it’s disguised with a lot of fun and that’s some of our most effective exercise programs here.”

County Manager Eric Mosley hopes to see pickleball expand here as it continues to gain popularity throughout the country.

“We want to see the seniors use it, but we also are seeing a great need for young people as well. I happen to actually know a guy who lives in my neighborhood, Jim Rogers, who is a professional pickleball player,” Mosely said.

“We’re certainly hoping people like this can mentor young people to take this on and take the sport. [We’re] seeing more and more young people that are getting into this and certainly a higher level of competition because of it.”