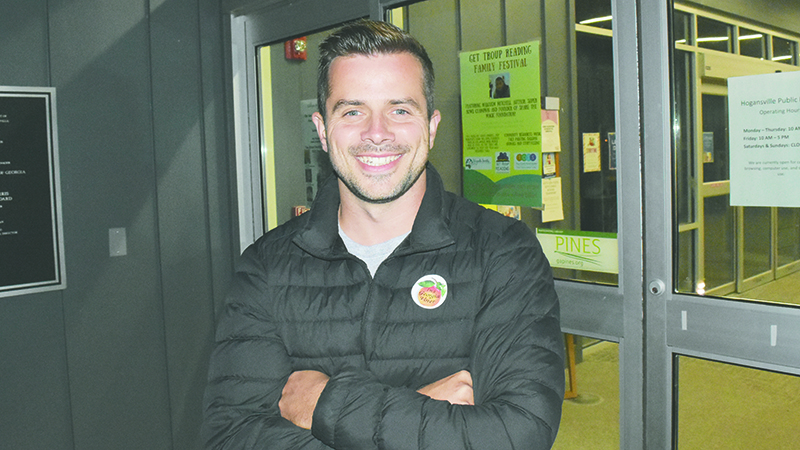 Hogansville has a new mayor.

Jake Ayers won the mayoral seat Tuesday night with 203 votes, 36.78% of the entire votes. Angela Price finished with the second most votes with 167 votes or 30.25%. Bill Stankiewicz, the incumbent who had served two terms as mayor, came in third place with 102 votes or 18.48% of the total votes.

Ayers said he was first motivated to run in this race due to his involvement with Pioneer Georgia in Hogansville.

“We’ve been here for a long time trying to get businesses off the ground, trying to recruit people and that became harder and harder as we saw the leadership of the city not going in a healthy direction,” Ayers said. “So, we just decided we wanted to step up and stand in that gap and try to make better decisions.”

As for his first goal as mayor, Ayers said he plans to restore citizen’s faith in the leadership of Hogansville.

“The voters have spoken. And once again, they prove that people get the government they deserve,” Stankiewic said. “I plan on finally after three tries becoming completely retired … My wife and I love to travel and we’ll travel.”

Angela Price said that despite her loss, she will work with Ayers to continue to help the citizens of Hogansville.

“I think the people voted for who they felt was the best person for the job. And I think that Matt and Jake are going to do an excellent job,” Price said. “I am ready to work alongside them and help in any way that I can so that we can work together and better Hogansville.”

Bailey said he will continue serving the Hogansville community in the various organizations that he is a part of.

“I will keep on doing the veterans administration’s stuff, Veterans Day and Memorial days, and just my civic group, Salvation Army,” Bailey said.