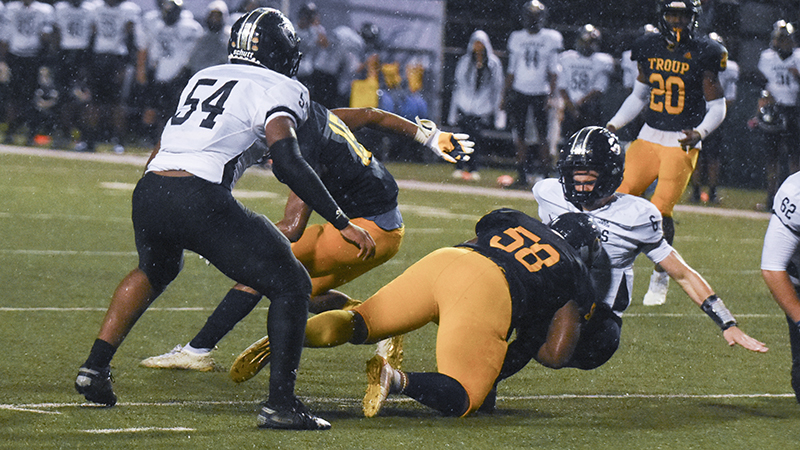 Three turnovers doomed the Troup Tigers Friday night during a rainy night at Callaway Stadium as they saw their season come to an end.

Troup lost to Spalding 10-3 in a first-round AAAA playoff game that turned into a battle against the elements as much as it was about the two teams on the field.

Following a fumble by the Tigers, Spalding made an early field goal to take a 3-0 lead in the first quarter, which was played in beautiful weather, including almost no wind.

The Jaguars drove deep into Troup territory again, but CJ Sands intercepted a pass in the end zone and ran it back to the Troup 39.

By the time the Tigers drove the ball inside the 5-yard line in the second quarter, the calm night had turned into a downpour — one that would last throughout the rest of the game.

Troup was backed up by a block in the back penalty, and the Tigers couldn’t get in from there. A field goal in the pouring rain by Cody Bray tied the game, but Glisson knew it was a big opportunity missed.

The score remained there at halftime.

Unfortunately for the Tigers, it was Troup that had the first big mistake of the second half. A failed punt attempt by Troup set up the only touchdown of the night, a short Spalding touchdown run by Jordan Jester.

The rest of the second half was dominated by punts by both teams. It was clear the pouring rain dictated much of the play calling, and Spalding was content to sit on a seven-point lead and force Troup to make a big play.

“It was raining on both sides of the field, but I think it hurts whoever is trying to play from behind,” Glisson said. “Once you get behind very first thing in the third quarter, the weather hurts your play calling.”

The Tigers had a few chances, including on a final drive that started at their own 10 with 1:39 left. Troup quickly moved onto the Spalding side of the field, but the Jaguars held on a third-and-one and fourth-and-one to send the visiting sideline into a huge celebration.

Glisson said the Tigers made sure to honor their seniors after the game. He also said there was plenty for the team to be proud of this year.

“It’s disappointing, but we’ve reached a lot of goals this year winning eight games,” Glisson said. “You beat your rivals, do certain things that you have great memories. And truth be told, there’s only one team that’s going to finish this tournament with a smile on their face.”