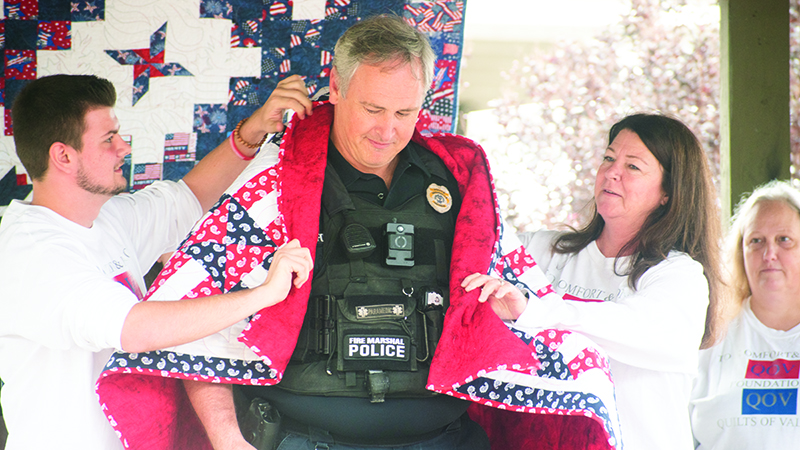 Throughout Troup County, members of the community held events to honor and remember those who have served and are currently serving our country in the line of duty. From children at Ethel Kight Elementary School holding a drive-thru parade to veterans groups hosting their annual events, Troup County thanked the troops throughout the day.

Sgt. Maj. Ann Erenheim of the U.S. Army kicked off the event with a welcome at 11 a.m. followed by a posting of the colors performed by Troup High School ROTC.

“Today, we gathered to celebrate honor and remember all of our military veterans, regardless of when and where they served,” Erenheim said.

After an invocation and recognition of the veterans, Sgt. Maj. Keven Jefferson of the U.S. Air Force spoke on recognizing veterans in the community and his own work within Troup County. Jefferson delved into his own decision to join the armed forces.

“I received so much more than what I thought I would receive when I first signed my name to the dotted line,” Jefferson said.

Jefferson recalled the opportunities presented to him through his time with the armed forces and stressed the importance of serving to all veterans.

“What was important was that I had a chance to serve and to give back to my community. Once again, like all other veterans, we don’t stop serving.” Jefferson said.

Jefferson mentioned that through his opportunity working with the Troup County School System, he was able to see kids grow into citizens. He said he was surprised by one of his former students.

“In my six years, I got to see hundreds of my students go to service academies, go to college, go into the military, to be productive citizens in life,” Jefferson said. “But most recently in life, I had the opportunity to put on my military tuxedo, at her request and to walk one of my first graduates down the aisle…. Talk about a surprise. What an honor to have made an impact. It’s such a privilege.”

Jefferson in an interview after the event said that working with the ROTC members of Troup High gave him a sense of purpose, not the monetary compensation for the job.

Bernard Bledsoe of the United States Marine Corps said that this event is a yearly reminder of the cost of freedom and allowing members of the community a space to thank veterans for their service.

“We’re just glad to have the opportunity to remind people that freedom is not free. It was bought at a cost.” Bledsoe said. “(This is) just an opportunity to let people remember and take part in thanking the folks that have maintained freedom through all of it. All of our years.”

In Hogansville, several veterans and their families visited Calvin Hipp Veterans Memorial Park. The event highlighted the veterans who fought in the Gulf War’s Operation Desert Storm, which launched on Feb. 24, 1991, thirty years ago.

Bailey and Marshall served alongside one another in their division’s artillery unit.

“I remember when I first saw him, he was built like a linebacker,” Marshall joked. “He came to the unit, and I thought he’d be a good one for the Georgia Bulldogs.”

“It really takes you going somewhere outside the United States to appreciate you being in the United States,” Marshall said. “I’ve been to many places, Germany, Italy, Turkey, Greece … and I’ve always longed to come back home.”

He added that Veterans Day signified the need to look after all veterans, both actively serving and retired.

“We’re losing the older veterans … also, we’re still trying to eradicate [veteran homelessness], after the pandemic, it’s gotten worse,” he said. “But there’s plenty of resources available. And, if you have a veteran buddy, check in on them.”

Torres, a Post 152 veteran, spoke on how he has witnessed aspects of several wars throughout the years, including the Cold War and the war in the Middle East during the post-9/11 era. He joined the Navy in 1980 and served two tours overseas.

One of his proudest moments, he noted, was seeing the end of the Cold War.

“A lot of people don’t realize that the nuclear threat was very real, and that was something I was so happy to help stop, that growth of nuclear weapons everywhere,” he said.

Now, as a retired veteran, he follows the service work of active veterans, including members of his own family.

“I have two children who are in the service, one in the Air Force and one in the Navy, and I think about them all the time,” he said. “I ask everyone to keep all veterans in your thoughts and prayers.”

Other aspects of the event included patriotic singing from students of Hogansville Elementary School, as well as a quilt ceremony from the Quilts of Valor. Several veterans received handmade quilts from the organization and some stepped forward to receive quilts for family members who could not be present for the event.