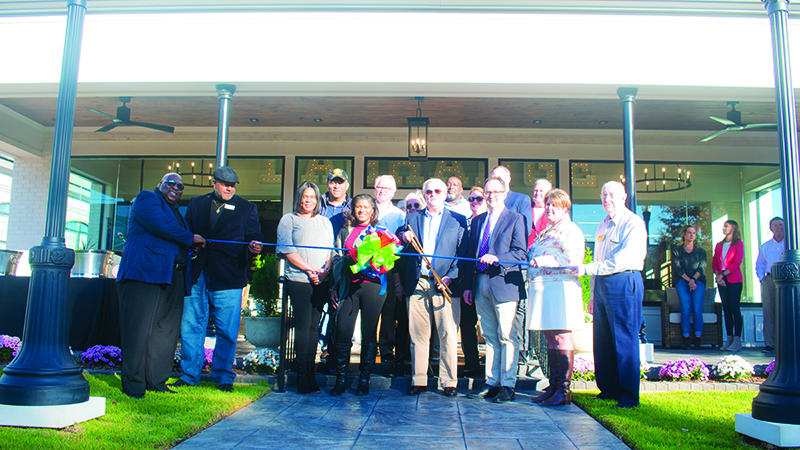 For months, Visit LaGrange and other entities of LaGrange’s tourism industry were sharing tight quarters in City Hall. Not anymore.

On Friday, a ribbon cutting was held for the newly-opened Visit LaGrange Visitors Center, located at 206 Ridley Avenue.

“A new visitor center for LaGrange is a very momentous occasion and something I never thought I would see,” said Carleton Wood, the chairman of Visit LaGrange, during the ribbon cutting. “We are so pleased to have so many citizens that love our community and want to support and grow our tourism industry which creates more that 1,400 jobs in Troup County annually.”

Within the building lies portraits of many of Troup County’s attractions: West Point Lake, Charlie Joseph’s and artwork from the LaGrange Art Museum. Downstairs hosts album covers of some of music’s greatest stars and a sitting area. Also on the lower level is a courtyard that was repurposed from a previously existing alleyway.

“This was bit of an eyesore for the last couple of years, so we’re glad to put some money into this to have very usable space,” City Manager Meg Kelsey said.

The project has been ongoing for approximately 15 months, said Kathy Tilley, the president and CEO of Visit LaGrange, to turn the commercial duplex into a suitable building for Visit LaGrange.

“We are so proud of it, and we’re so thankful that the city is promoting tourism and that they’re supportive of tourism,” she said. “We’re glad we can be here and showcase all of our attractions.”

Wood gave special thanks to “those who laid down the foundation for tourism” in LaGrange, including members of the Downtown Development Association and several surrounding businesses.

He noted the earlier days of LaGrange’s tourism department in 2002, then led by Melody Reeves, as he took on the role of director of Hills and Dales Estate. Reeves role was passed down to Dianne Levesque, who served as tourism director for 14 years, and most recently to Laura Jennings and Dave Marler. In terms of the city’s support, he noted councilmember Willie Edmondson, who acted as a tourism representative for the LaGrange City Council, and many others.

“Visit LaGrange was chartered only two short years ago, in 2019,” Wood said, adding that Bobby Carmichael served as its first chairman and helped launched its current efforts. Currently, Visit LaGrange is led by a seven-member board appointed by the city council.

Carmichael, who now works in a volunteer role to support tourism in the community, was honored during the ceremony with a bench beside the facility. He previously had a role in bringing several aspects of LaGrange’s downtown area to fruition, including the Marriott hotel on Broad Street.

He described his role in bringing the visitor’s center forward, as well as other projects, as “being in the right place at the right time” and offering his vision as it was needed.

“[The visitors center] turned out great, and I questioned it for a while because this was almost a tear-down building, but they did a great job and I think it will serve the city and the tourism [department]  well for years to come,” Carmichael said.

‘Mr. Callaway’, Justin Williams emphasizes what it means to…