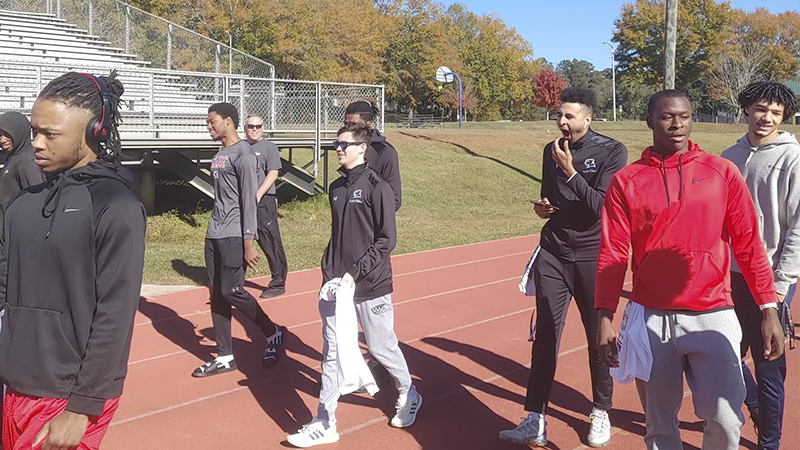 In spite of the cold weekend, the LaGrange College Sports Management Club held a 24-hour walkathon to raise money for the Ronald McDonald House in Columbus. Thirty students participated in the event and walked around the track at Granger Park while some sponsored participants each mile that they walked. There was also a raffle supported by local businesses and t-shirts sold to raise money.

Emma Rose, the student director for the walkathon, organized the event as part of her Sports Sales and Fundraising class with Dr. Preston James.

“Personally, it was the first event that I’ve ever organized almost completely alone and just seeing what goes into it, I think it was a great experience,” Rose said.

Leila Moss, a fellow student and member of the Sports Management Club, participated in the event this past weekend. She ended up having a sponsor for each mile she walked.

She also helped Rose get sponsors from the local community going into Saturday’s event.

“To get the sponsors, Emma and I walked around LaGrange [areas] like the square and different companies around the city and just asked them if they were willing to make a monetary donation or just give something we could raffle off,” Moss said.

All of the money raised went to the Ronald McDonald House. Kianna Jackson, the program director for the organization, spoke highly of the fundraising initiative and those who helped put it on.

“They didn’t need much from us. They already had a plan, which was great,” Jackson said. “They were very professional in what they [did], and we definitely appreciate all their efforts and help supporting our families.”

Jackson elaborated that the money raised will go toward families with children who are in need of healthcare.

Rose said that choosing the Ronald McDonald House was an easy choice as she has a personal connection to the cause.

“It was easy to choose Ronald MacDonald because I know people that have used the foundation before. And I have people in my family with chronic illnesses,” Rose said.

The walkathon ended up raising approximately $2,500 despite the event having to halt Saturday night due to the freeze warning. James said he is proud of what his class accomplished.

“Obviously they took on a big event with it being 24 hours, with a freeze warning that you didn’t plan on that happening, but I think overall the event went well. The students put up a good effort to put it on, and we had great sponsors,” James said.

Rose shared in this sentiment but hopes to raise more money during this week’s sports management events occurring on LaGrange College’s campus.

“I am happy with it. I think we could have raised a little bit more with more participation. But with the people who did show up, I think we raised a good amount of money, especially since it’s just the beginning, and we’re looking to raise more for the entire week,” Rose said.