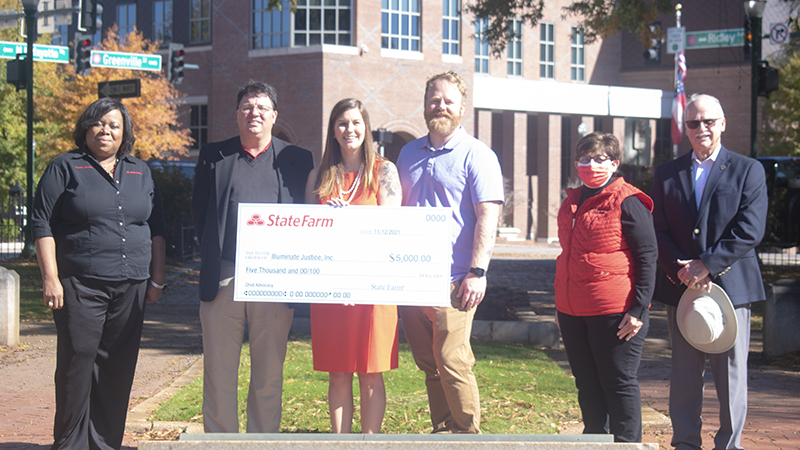 Illuminate Justice, a West Point-based anti-human trafficking organization, recently received a donation that will help in its efforts to address child safety in the area.

Maggie Turner, the president and founder of Illuminate Justice and a law student at Georgia State, received $5,000 by State Farm Agent Matt Orr, who noted a high appreciation for her organization.

The organization was one of 2,000 applicants to apply for the State Farm Neighborhood Assist grant program in August and quickly made it to one of 200 final spots. The top 40 finalists were chosen online through a public vote system to receive the grand prize of a $25,000 grant fund. Just over 3 million votes were cast, but Illuminate Justice was not in the top spot.

However, Orr said the organization stood out, and they still wanted to help the area non-profit.

“I have two young daughters … so anything that we can do to help children is very positive,” he said.

The mission of Illuminate Justice is to help communities prevent child trafficking and exploitation through education and prevention, Turner explained.

“We use curriculum that’s geared toward that sixth to twelfth grade age … that teaches them about how predators and traffickers work, how they groom, how they approach [someone] relationally and how they try to become a friend or a boyfriend,” she said. “Next semester, we’re potentially bringing the curriculum to protect about 300 [middle schoolers] in Troup County.”

Judge Michael Key with the Troup County Juvenile Court advocated for the program, noting its importance in stopping exploitation before children go through the justice system.

“We deal with children, unfortunately, after they’ve experienced something very traumatic,” he said. “We’ve had the tragedies you wouldn’t think happen in a city like LaGrange. We have three young ladies under our jurisdiction now who unfortunately have been exploited, and it’s really tough when you get to that point. Anything we can do on the front end to [prevent] it is great.”

Turner hopes to expand her organization, which was incorporated in March, to reach as many students in Georgia as possible. One of her goal is to facilitate groups locally, but also to extend services and her curriculum to kids in areas like Columbus.

The board of Illuminate Justice is currently working on volunteer outreach to get adults certified to teach the curriculum in other Georgia areas, she said.