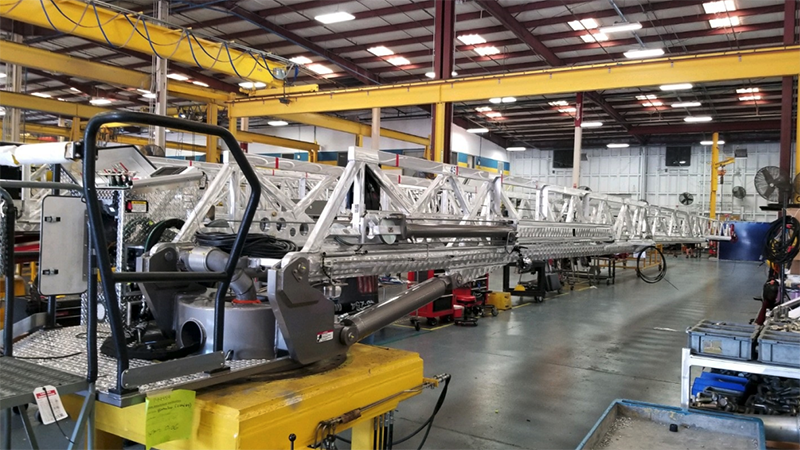 Above shows the Troup County Fire Departments truck, which is set to be completed later this year.

The Troup County Board of Commissioners approved equipment purchased on behalf of the Troup County Fire Department Tuesday night, a decision that had a price tag of nearly $151,000.

The board approved the department’s request to purchase $150,983 worth of fire hoses, airbags and struts, portable radios, Hurst extrication and self-contained breathing apparatuses. This request is within the department’s previously approved budget for $1.2 million for a new aerial ladder firetruck requested earlier this year.

The truck is expected to be delivered to the department by the end of the year and will include additional equipment that will significantly aid the fire department on its calls.

“The airbags and struts are something we do not have, and this will enable us to handle tractor-trailer incidents on the interstate a lot safer,” Chief Roy Cadenhead said. “We’ve had some really bad trailer tractor accidents that the struts can be used in. [With the firetruck struts,] instead of just holding something up, we’ll be able to control that strut.”

The addition of the multi-functional truck with its new features will add a new sense of self-reliability, according to interim Fire Chief Michael Strickland.

“We do rely on mutual aid with departments as much as we can, but they’re handling their own call volume as well and sometimes they may not be available to send a truck,” he said. “We want to be as self-sufficient as we can to handle these events that we have on both the major interstates we have in Troup County.”

In earlier December, several Troup County firefighters will attend a week-long class on aerial operations with the Columbus Fire Department, who have firetrucks very similar to the one the department will receive.

The funds for the equipment will come from the SPLOST V proceeds.

The department was additionally approved to apply for the Assistance Firefight Grant. The department applied for the grant in 2020 but was unsuccessful.

With the grant, the department will purchase five-inch hoses for its other county firetrucks, a total of $427,600.

“It would outfit all of the frontline fire engines and reserve engines … and it would increase our water supply capabilities on scenes and also make us compatible with the City of West Point and LaGrange, who already have five-inch hoses,” he said.