LaGrange coffee shop owner worked in dozens of cafes; now she has her own 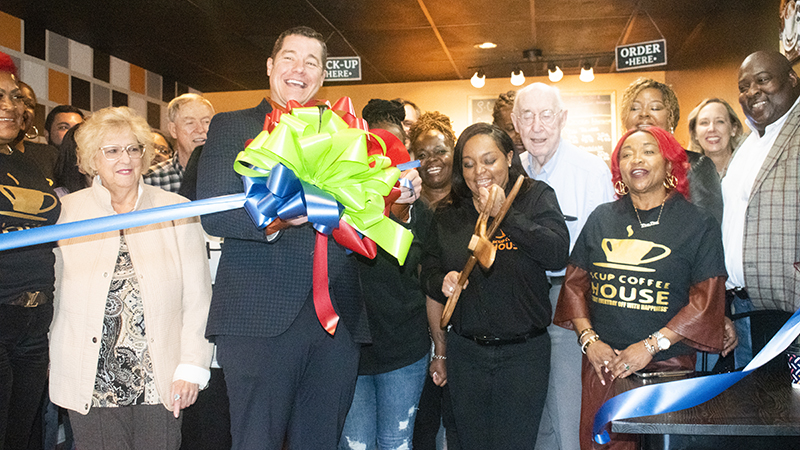 Shaquita Robinson, 31, did a little bit of everything as she tried to decide what she wanted to do for a living.

However, she always knew she wanted to open her own business.

“I wanted to be able to help other people,” Robinson said.

She accomplished this dream in August when she opened S Cup Coffee House, and Tuesday she celebrated three months of success with a LaGrange-Troup Chamber of Commerce ribbon cutting.

As soon as the ribbon was cut, she was back behind the counter, preparing drinks for her host of family and new and returning customers who helped her celebrate her shop’s fruition on Vernon Plaza.

“The last couple of months have been challenging … but the only thing that has kept me going is the support of LaGrange,” Robinson said.

Robinson is originally from Atlanta where, at the age of 16, she began working a variety of customer service jobs, the majority of which were in coffee shops. Her work at them helped her hone her skills as a coffee barista, and she decided she would pursue opening her own shop.

“Once it became second nature to me, it was something that was easy,” she said.

She moved to LaGrange three years ago, and last year was laid off from her job. However, this acted as the catalyst to open her own business once and for all.

“That was my last straw,” she said. “I didn’t want to do that anymore. When I was [in the area], I saw that space was available to rent, and it all just fell together.”

Robinson currently lives with the LaGrange Housing Authority, who she said has been one of her biggest supporters in terms of helping her build on her business and access the right resources.

“They’re still so supportive in my dreams, and everything I’m doing,” she said.

Robinson sells hot and cold coffee beverages and sweets from Food Direct, and customizes drinks to account for her customers’ preferences and allergies.

She hopes to eventually add more food items and possibly move into a larger location in the future.