Marist beats LaGrange in second round of playoffs 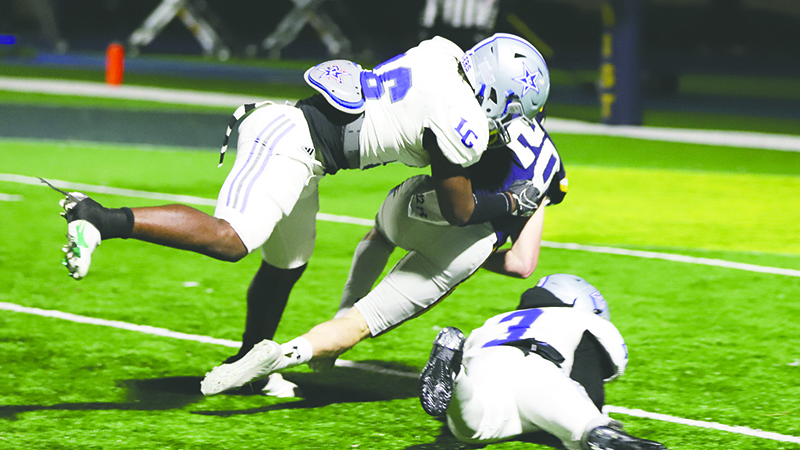 A great LaGrange High football season ended Friday night at Marist — a team that has only lost once since November 2019 and looked the part.

The War Eagles scored on their first six drives, though they were aided by some Grangers mistakes.

Marist faced a big early fourth down on its first drive of the game, but picked it up with a run right up the middle by Andrew Mannelly.

The War Eagles capped a 12 play, 70 yard drive with a 5-yard touchdown run by Daniel Hollingsworth to go up 7-0.

The Grangers then fumbled the ensuing kickoff and Joseph Patin ran it back roughly 20 yards for a touchdown. Marist then kicked off again and the Grangers fumbled on one of their first plays from scrimmage, and the War Eagles recovered at the 19-yard-line. Mannely scored from 19 yards to take a 20-0 lead.

The Grangers showed some life on offense on the next drive. A long run by AJ Tucker moved LaGrange inside the Marist 20 yard line, and eventually the Grangers moved inside the 10. Unfortunately for LaGrange, quarterback Tae Snead was intercepted in the end zone by Walker Richens. After a penalty, it moved the War Eagles back to their own 3.

Even being backed up deep in their own territory didn’t stop the Marist triple-option attack.

The War Eagles went 97 yards on four plays, capped by a 4-yard rush by Richens. That made the score 27-0.

Marist added two more touchdowns in the first half.

Thad Dixon added a touchdown in the second half for the Grangers to make the score 48-7.

The Grangers finish the year 9-3 with losses to Carver, Troup County and Marist.