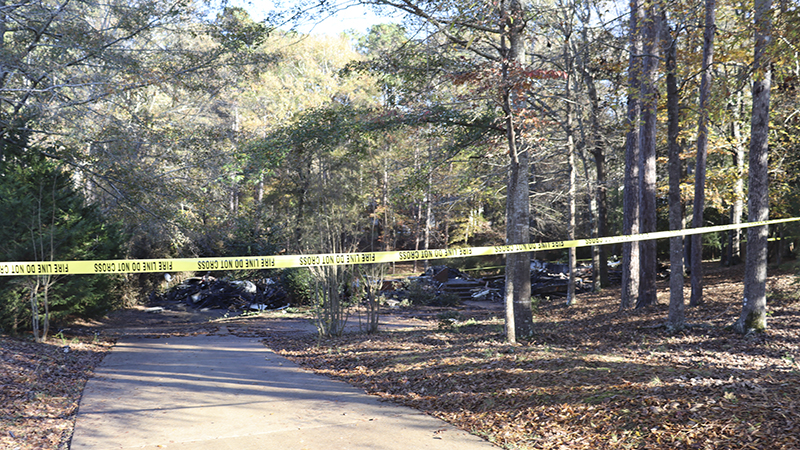 Investigations continue into the 18-hour police standoff that took place at Sunny Point Creek this week, but many residents impacted are glad it’s over and happy to be back in their homes.
The suspect in the case, Brian Jessee, 39, is suspected to be dead after a fire in the residence he barricaded himself in.
Captain Dale Strickland, a law enforcement veteran, said this was a unique case for Troup County.
“The thing that made it unique for me was the threat specifically made to law enforcement and the amount of weaponry this individual had and the type of weaponry,” Strickland said.
As the investigation is still ongoing by the Georgia Bureau of Investigation, many details cannot be revealed to the public at this time. However, Strickland did highlight one way that members of the community can learn from the tragic incident.
“If they’re having issues related to mental health, seek help,” Strickland said. “I want folks to understand that from a law enforcement perspective, we want to assist in any way that we can in our role [by] getting them plugged into resources that are in our community.”
Residents who live in the Sunny Point Circle neighborhood acted as spectators to the standoff throughout, some ventured to safety further into town while others tried to wait out the situation in hopes of getting to their homes. But as the hours drew on, residents heard bullets and smelled smoke when the residence Jessee was in caught fire.
Many residents in the immediate neighborhood were evacuated, while others just outside the zone were asked to not leave their homes. Dozens of residents who came home to the standoff were barred from re-entering the neighborhood for their own safety. They either waited the situation out in their cars or with other family members.
Carol Cain, whose home was located only a few houses down from the incident, returned to her home briefly Tuesday morning after spending a few days with her nearly three-month-old granddaughter.
The day before a resident asked her daughter if Cain was OK, alerting them both of the standoff. Cain’s neighbor, who had stayed in her home, kept in touch with her throughout the ordeal.
One neighbor in particular sent her the message: “don’t come home.”
“My neighbor across the street told me that there were nine police cars in front of my house,” she said. “They [were] setting off a drone camera from my yard.”
As the situation proceeded, Cain bunked with her sister in Hogansville but kept in touch with the neighbors who stayed.
Donna Jarzen, who lives on Woodchase just behind the residence Jessee was barricaded in, was spending a relaxing day at home with her husband, Jim, when they left to run errands late Tuesday afternoon. Their dog, a three-year-old Fox Terrier, Max, was left outside in his pen.
Upon leaving their sequestered neighborhood, they noted a few officers in Sunny Court Circle, but otherwise paid their presence no mind. Upon returning an hour later, the police presence had intensified, and they were barred from returning home.
“As we got up to the policeman, he talked to us and said there’s something going on, don’t worry about your house, but you can’t come in right now,” Jarzen said.
The Jarzens joined a row of other residents waiting for the standoff to end, and would spend the night in their car, sharing a car charger to keep their phones charged.
“We were able to hear the big bangs and the gunshots,” she said. “I was like, I hope nobody was hurt. What’s my dog doing?”
Following the explosion Wednesday, the two were permitted to return home, unsure if they would find smoke damage or even bullets holes. More pressingly, they were concerned for their dog, who had stayed in his pen all night.
Jessee’s life and personality were a mystery to residents, some not knowing him at all.
After she returned home, Cain found a letter from the GBI requesting her to call them and share any information she had on Jessee. Cain had very little she could offer.
“This gentleman asked me if I knew Jessee, and it was kind of sad to say no, I didn’t,” Cain said. “I knew the kids would get dropped off in front of my house … and I was sad that I didn’t necessarily know my neighbors because that’s three doors down. I could tell them what [kind of car he had,] but I did not know the man, and I wouldn’t even be able to pick him out.”
Cain said she’s resting easy now that the incident has come to a close , but it’s made her look at her surroundings differently.
“We need to know who our neighbors are … but there’s been a lot in the last couple of years, especially with COVID, about mental health issues, and I think it’s important that we address that and that we’re looking for ways to help reduce the [stigma],” she said, adding that she was concerned about the weapons issue of Jessee having so many guns on his person.