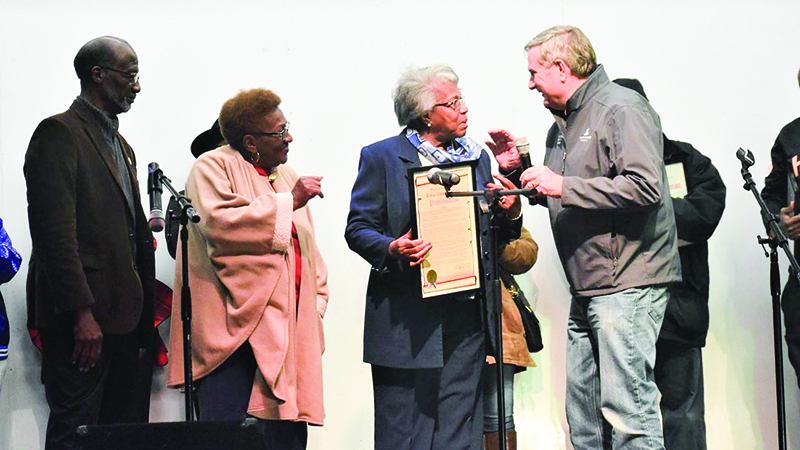 Patrick Crews hands a proclamation to family members of the late Richard and Cheris English.

The parade began at Eastside Park and finished at Calumet Park, where the tribute to Richard English Jr. and his wife, Cheris English, among others, was held.

Richard previously served on the District 5 seat of the Troup County Board of Commissioners for 43 years and is the only black commissioner in Troup County’s history. Cheris served as a school teacher and a service member in the community for decades. Both died within a month of each other earlier this year.

Board of Commissioners Chairman Patrick Crews read a proclamation, then gave it to the English family.

He served on the Association of County Commissioners across Georgia, LaGrange Civic Improvement Association and numerous other boards and organizations.

Shortly after his death, the county’s Strongest Link Award of Excellence was renamed in his honor.

In an off-script moment, Crews encouraged the audience to go out and vote in the county commissioners’ runoff race on Nov. 30, which candidates Jimmy McCamey and Norma Tucker and vying for.

“I know Commissioner English would challenge you to speak out to other people … to get out and vote and honor his 43 years of serving this community,” Crews said.

“I met Mr. English several times, and he was such a soothing person, always wanted to help, always a calming person,” Sumpter said.

Other community leaders, who have served the area in education, recreation and other fields, were also honored Friday night.

City Councilmen Willie T. Edmondson and LeGree McCamey honored the Rev. Carl Von Epps and his wife, Benita Von Epps. Carl previously served as the state representative for the area, Edmondson said. He along with other members of the Hands Helping Hands Committee, formed the Black Elected Officials of Troup County.

Former councilwoman Norma Tucker honored Willie and Louneal Coleman. The Colemans, who are in their 90s, stayed in their car while the plagues were accepted by family members on their behalf.

“Mr. Coleman retired after serving for so many years in our school system, and Ms. Louneal has been working as a nurse, a community leader,” Tucker said.