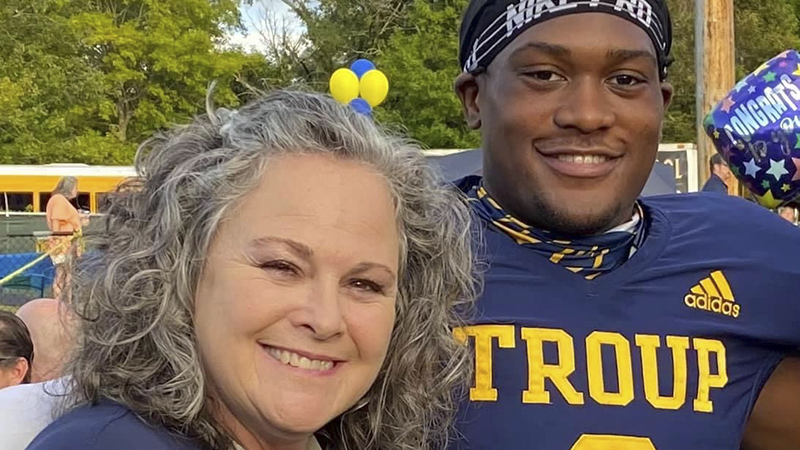 EDITOR’S NOTE: This story is part of a continuing series on all of the teachers of the year across the Troup County School System.

Judy Robinson, co-teacher of the year at Troup High School, started pursuing her career in teaching at the age of 29 after a career as a bookkeeper. She received her bachelor’s and master’s degree at the University of West Georgia and has been a teacher for the last 28 years. For the last four years, she has been teaching chemistry at the high school level.

Principal Niki Watts of Troup High School said Robinson makes learning a tough subject like chemistry fun for her students through the use of creative labs.

“She goes above and beyond to create lessons to engage the kids. In that innovative capacity, they’re shooting flaming balls out of a nerf cannon, and they’re going outside [and] doing all these experiments,” Watts said. “That’s the kind of stuff when the kids think back on their high school experience that will stand out, not so much a lecture that was given or some lesson out of a textbook or some scientific formula. [It] is going to be that hands-on application that was different than their normal classroom experience, and Miss Robinson works hard at those.”

This innovation is purposeful on Robinson’s part as she wants to capture and keep her student’s attention so that they can learn the material for her class. Robinson said she starts this from the moment they step into her room the first day.

“The first thing I do [on] the very first day of class is ask for money, and I always try to get the [student] with the biggest bill. I’ve had one kid [with] a $100 bill,” Robinson said.

“I say ‘Let me wash it off because I don’t want germs and COVID and all this kind of stuff.’ I’ve actually got rubbing alcohol in the water, and then I set it on fire and they see their $100 bill going up in flames. But yet it’s still [undamaged] a few seconds later.”

Naz Easter, a football player and senior at THS, said Robinson made science, a subject he hates, fun for him by relating it back to him as an individual.

“I might not understand the certain thing that we’re learning [and] she will try to relate it back to football and make me like it,” Easter said. “She changed my whole perspective on it. She makes me like science because she’s so caring and loving about it. She nurtures me into liking it.”

Robinson’s other students feel this sense of care from her as well.

Makayla Daniel said she talks to Robinson the same way she might talk to another student or friend.

“She’ll also use her experiences and give you wisdom on how to go about things …  She just has a lot [more] experience than we do, but she portrays it different to us than most teachers would,” Morris said.

Robinson said that she makes an active attempt to get to know each of her kids.

“I have to know about them and that doesn’t mean the dirty or the bad, the good, but I have to know them. I have to ask questions,” Robinson said. “If they feel relaxed around you, they will share things … Because I’m honest with them and I’m upfront … they’ll come to my room crying. [Then], we’re out in the hall, [and] we’re talking.”

Watts said she has witnessed this firsthand in her role as principal.

“Mrs. Robinson really embraces the idea of all of her students as individuals. She takes the time to get to know them [and] to build relationships with them, which is foundational for their success,” Watts said. “She’s got an innate ability to connect with all kids regardless of race, socio-economic status, interest, and we have a pretty diverse population here a Troup High.”

First Baptist on the Square collects over 3,000 boxes…