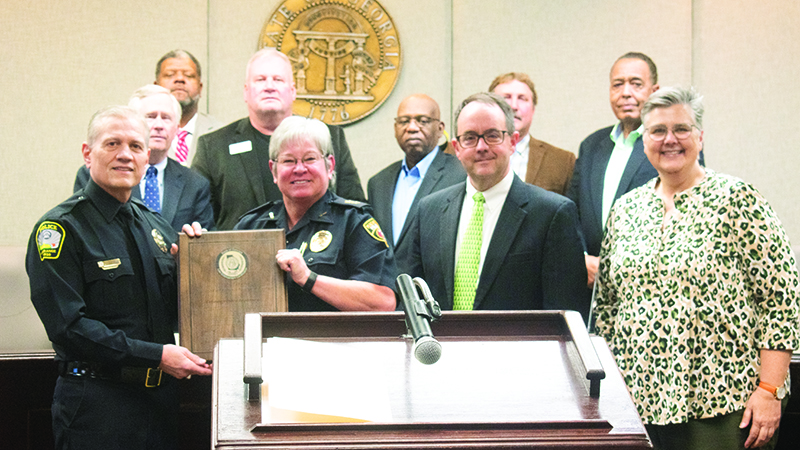 The LaGrange Police Department received its eighth state reaccreditation Tuesday night, a process that reflects its 23 years of metamorphosis.

Chief Janet Moon, Georgia Association Chiefs of Police President and Chief of the Peachtree Police Department, presented the certification at the LaGrange City Council meeting and commended the force for its ongoing efforts to maintain professionalism in an ever-changing police climate.

“The LaGrange Police Department has been willing for the last 23 years to open themselves up for scrutiny, evaluation and efforts to demonstrate that that they remain relevant and up with current law enforcement practices,” Moon said.

State certification for police agencies is a voluntary program that an agency elects to participate in to improve their overall performance and to continue to strengthen their relationships between other agencies and the citizens they serve. Doing so also demonstrates an agency can adjust to new policies, Moon said.

The accreditation is determined once a final report goes before a joint review committee of trained accessors who determine if that agency meets the requirements for state certification.

Each agency also performs its own self-evaluation.

“What we’ve in the past 18 months in law enforcement has been unprecedented,” Moon said.

“In my 36 career, I’ve never seen anything of this nature.”

The LPD was initially certified in 1998 by the Georgia Association of Chiefs of Police and certified by the Commission on Accreditation for Law Enforcement Agencies, Inc. in 1999.

Mayor Jim Thornton acknowledged the LPD’s recent efforts in the Sunny Point Circle standoff, as well as the work outside police agencies contributed.

4The council held a public hearing and first reading to receive comments on a request to annex/zone property located at 1360 LaFayette Parkway. The property is set to be rezoned from general commercial to corridor mixed-use.  The facility will be used as a showroom for BC Stone Homes LLC. No one came forward to comment on the rezoning.

4 Council approved a request to annex property located between 114 and 316 of New Airport Road. The property of 1.42 acres will be used as workspace for a private citizen. The city owns the sewer line on the property.