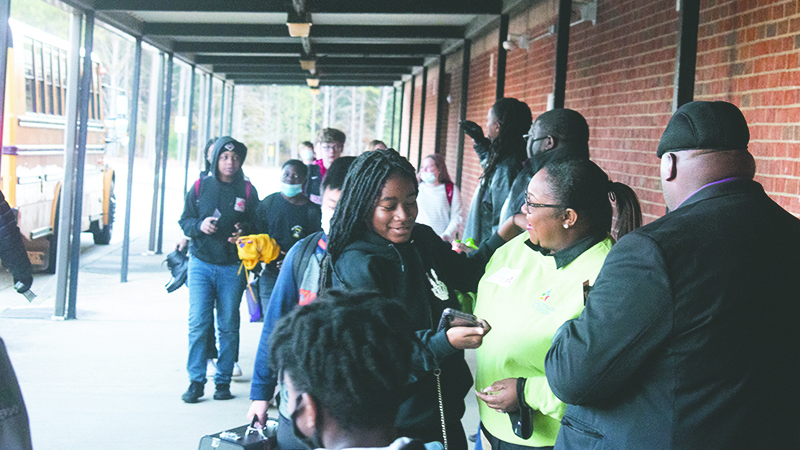 Volunteers and staff with Communities in Schools of Troup County greeted students with warm wishes and snacks when they returned to Callaway Middle School following the Thanksgiving break early Monday morning.

CIS was at the school to launch its Dads on Duty and Moms on a Mission mentorship program, which will act as a way to positively impact students in the area, said Tabitha Lewis-Coverson, the executive director for CIS of Troup County.

“There are a lot of students we work with that come from homes where there’s a lot going on and focusing on school is the last thing on their minds,” she said.

“I want to have people come to the school, our community leaders, be here when they get off the bus, give them positive affirmation so that they can walk in the school they can feel a little bit better.”

The launch of the program included 10 volunteers who awaited the arrival of 30 buses worth of middle schoolers.

One volunteer was George Bailey, who was representing Hogansville. Bailey’s children formerly attended Callaway Middle School and he now has one grandchild currently attending.

“So many students are down in the dumps and don’t have that father or mother figure,” Bailey said. “I’m thankful I could be here today to be that role model.”

Derek Williams, who worked alongside his wife, Stephanie Williams, has two children in the Troup County School System, including one at Callaway Middle School.

Williams said he volunteered for the program because it is important to him that all children, not just his own, have a positive school experience.

“Kids like to know that people care,” he said.

“My son has brought home some stories … he’s seen [how] his household is different from other households, and that they are not getting that some energy and that same [push], and I think this [program] will push kids to excellence but just letting them know they care.”

CIS provides snacks for students who may have missed breakfast, and rather than single out any students, they made it available to all.

Lewis-Coverson mirrored the program after one she recently witnessed taking place in Louisiana.

“A couple of weeks ago, I happened to be watching the news and I saw where this school in Louisiana was having ridiculous amounts of violence,” she said.

“A group of guys got together and they would be there at the schools … and offering [the kids] words of encouragement and kind of talk them through conflict.”

Lewis-Coverson said the Troup County School System does not have the same issues as the school in Louisiana.  However, the program started there sparked the concept that having community members give their time to students can provide positive energy, especially for those who don’t ordinarily receive positive affirmation.

“We want to show the kids we care, they are important, and we are rooting for their success,” Coverson said.

In the future, CIS plans to expand the program to other schools and possibly incorporate days to have lunch with the kids. Anyone wishing to participate at that level will be required to have a background screening completed if they have not already been screened by TCSS or CIS.