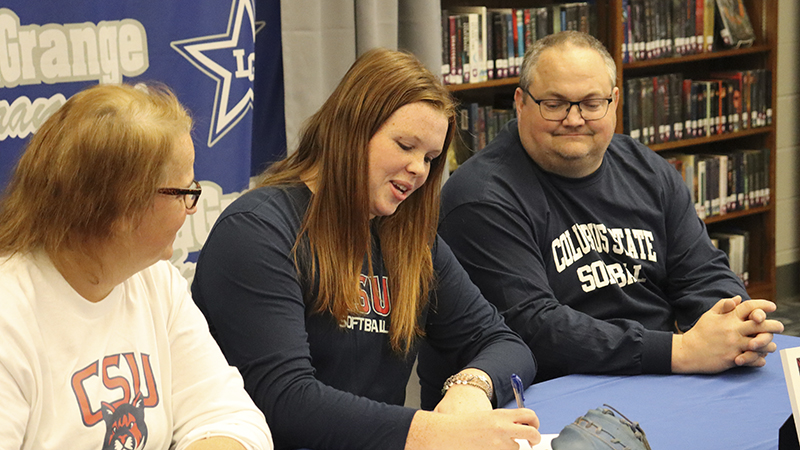 Anyone who has been to a softball, flag football or basketball game at LaGrange High School over the last four years has come to know Holly Lynn, who has starred for the Grangers across many athletic fronts.

Lynn signed to play softball for Columbus State University on Tuesday. Lynn was surrounded by friends and family as her and Gabby Heath, the softball coach at LHS, spoke at the celebration.

“I want to thank God because without him, none of this would be possible. I want to thank my family who have supported me emotionally and financially over the years and always coming out supporting,” Lynn said.

“Especially my little sister, Susanna, who hates softball, but somehow always makes an appearance whether she wants to or not.”

Heath lauded Lynn for her accomplishments in softball during her speech.

“She hit .560 with seven, technically eight home runs, a .602 on-base percentage, 30 RBIs and .958 slugging percentage,” Heath said. “Those stats got her the opportunity to play in the Allstate Georgia Dugout Club game a couple of weeks ago.”

Heath also said that she would describe Lynn as tenacious, and she has enjoyed watching her grow as a player over the years.

“She wants to get stuff done, and she’s very determined to get it done … She wanted to go to Columbus State and she figured out a way,” Heath said. “She athletically has grown over the last four years, and it is a great accomplishment. Columbus State is a Division Two school … I think she’ll be really successful in that setting.”

Shane Lee, Lynn’s travel ball coach, said she has been a great leader for both his team and LHS.

“She has become a good leader for my team, and I know she was for LaGrange. I came to watch a lot of games,” Lee said.

Lee said one of Lynn’s strongest skills is her power behind the plate.

“I’ll give an example of her power. They were playing Cedartown last year in the lead agency who went to the final four to go to state to Columbus,” Lee said. “I will never forget the pitch. As soon as she hit the ball, it was like one second, and it hit the scoreboard for a home run.”

Lynn said she hopes to major in biology or chemistry with a pre-med focus during her time at Columbus State.